A Brief History of Swans 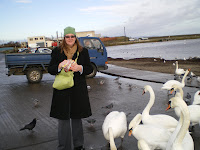 Last Tuesday I went to lunch in Bray with a friend. She brought bread so we could feed the swans. The swans were hungry, or at least, are suckers for carbs. Swans are bigger in person, and also very awkward on land. These regal birds are common in Ireland, and are connected to its story in several ways.

Irish Mythology tells of the children of Lir, the Lord of the Sea, who are turned into swans by their stepmother, out of jealousy and typical stepmother evil. Lir banishes the stepmother, but cannot reverse her curse that sentences them to 900 years as swans, to be returned to human form only when the bell tolls to signal a new god has come to Ireland. The swans survive their swan centuries, spending the last few years with a man named Mochua who is making a bell to signal to arrival of the new god brought by St. Patrick. The swans are almost abducted by a Warrior King whose wife desires to hear the swans’ beautiful singing, but Mochua is able to ring the bell, and the swans return to human form. The children begin to age rapidly, however, and die shortly thereafter. 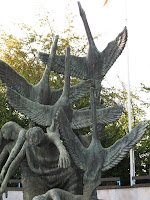 There is a statue of the Children of Lir turning into swans in Dublin’s Garden of Remembrance. I find the statue to be a little freaky.

Another swan tale involves Oliver St John Gogarty, a writer and doctor and friend of James Joyce who found himself in Joyce’s Ulysses as the character Buck Mulligan. Politically active, Gogarty also found himself taken captive by the IRA during the civil war in 1922. He escaped by diving into the Liffey. As he swam away in a rain of bullets, he promised the Liffey that he would give her two swans if she carried him to safety. He survived, made good on his promise, and even published a poem entitled An Offering of Swans.