Sopes with Dublin Bay prawns Panzanella with feta and olives

Along the Tapas Trail

On the wall at Havana on South Great George’s Street, a TV screen displays waves crashing and caressing a sunny beach, beckoning you to come away to a chilled-out place where time is measured by the tides. The people gathered here on Saturday afternoon were ready for a relaxing adventure, to seek out the sun, if only in the spicy flavors along the Tapas Trail. The group of five men and thirteen women sat along the bar and at small tables as dark-haired waitresses served platters of tapas: a pinxto with spanish tortilla, a slice of jamon, and an olive anchored to a piece of tomato bread with a wooden pick; a spicy chicken spring roll; prawns nestled together in a citrus garlic sauce. The platters passed by twice. And to drink, a glass of ruby wine, a Rioja. 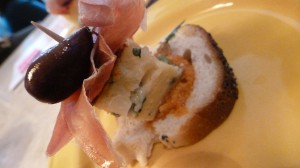 At one point a man in a tight t-shirt got up from his laptop in the corner and took the hand of the woman behind the bar. They began to twirl around the small open space, silkily running their hands along each other’s shoulders and hips. There was a slight pull to join them, but only one glass of wine had been consumed and the guests were still shy.

This gathering at Havana was the first stop on a tapas trail sponsored by Campo Viejo on Saturdays and Wednesdays during June. At the same time across City Centre, tapas trekkers were gathering in the four other stops on the trail: Port House, Bar Pintxo, and the Andrews Street and Parliament Street locations of Salamanca. The five regiments would crisscross city centre, led by a guide in a Campo Viejo golf shirt and red apron, armed with a radio–“Bar Pintxos, come in. Are you ready for us, Bar Pintxos?”–and some Dublin trivia along the way. Before departing Havana each person received a ticket to be stamped at each location which would serve three tapas and a glass a Campo Viejo Rioja. The price for each participant, a mere €20.00.

The Havana contingent moved next to The Port House and were directed upstairs to a room lined with wine bottles and candles, cozy and cellar-like despite its first floor location. The furniture looked messily pushed to the side, as if the previous group had been desperate to dance, but these visitors stood along the walls as the manager told the history of the restaurant and described that tapas that would be served–a paella, Pinchos Morunos (chicken marinated in smoked paprika and oregano on a skewer) and patatas (potatoes) mojo . Traditionally cooked in sea water, the potatoes are boiled until the water evaporates leaving a sparkly salt coating and are served with a deep red sauce made with ground chiles, garlic and almonds. The serving of paella was generous and the smoked paprika flavor was delicious on the grilled chicken skewer. Finishing these treats, the trekkers started to realize that the €20 investment was better than a value, it was a steal.

Heading from The Port House to Salmanca, the group traipsed through the streets feeling that combination of self-consciousness and sense of purpose in being, or at least acting, like a tourist. Stopped outside the Dublin Tourist Centre in the former Church or St. Andrew, the guide talked about the Irish 5th Brigade that fought in the Spanish Civil War . She passed out lyric sheets to Christy Moore’s Viva La Quinta Brigada and led the tapas choir in song, although it was not apparent that anyone knew the melody. A survey with a very small sampling indicated that no one had even heard of the song. That did not stop the guide from starting again at the beginning (On the radio “Five more minutes, okay!) and setting a poor example for some passing tourists of Dublin’s busking talent. Later one participant pulled up a video of Christy Moore’s version on his phone. “It sounds more Irish when he does it,” he said.

At Salamanca, the crew stood around a few tall tables and were served adorable mini pork burgers with a teriyaki mayonnaise, Russian salad with smoked salmon, and another take on paella adorned with Dublin bay prawns. After a pause to appreciate a young woman dancing Flamenco, it was on to Bar Pinxto, a sister restaurant to The Port House, for a grilled pork sandwich, chicken marinated in garlic and a stew of chickpeas and black pudding. Finally, a short walk through the bustling streets with just a sprinkle of rain brought the group to the second Salamanca location. The tapas were served here buffet style–a fried prawn, beef skewer and a seafood stew with Calamari served in a scallop shell. At this last stop, the diners relaxed in a nook of tables while a gentleman played Spanish guitar.

Along the way it was revealed that three Spanish citizens were among the group, although the guide was unsuccessful in persuading either woman to sing or dance. Later it was further revealed that the small Spanish woman with long blond hair is a Spanish cook, as her friend started handing out cards and testifying to her friends cooking talents. “This is good,” the blond woman was heard to say a few times, “But when I do, better.”

Possibly true, but for this crowd, Dublin’s tapas offerings made for a perfect Saturday afternoon.

2 Responses to Along the Tapas Trail