Along the Tapas Trail Picnic Dining–Terrine and Deviled Eggs

Panzanella with feta and olives 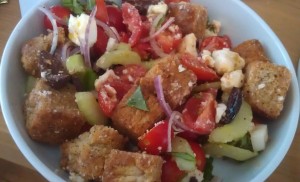 My apologies for the crappy photo–I had already tasted the salad and couldn’t take the time out from eating for a proper photo.

Man, is this good. Panzanella is a Tuscan salad of bread and tomatoes. It’s a great use for stale bread, and tonight I happened to have some stale homemade wholemeal focaccia.  It’s best in the summer when the tomatoes are the tastiest, but cherry tomatoes are fairly good all year. It would be sublime with juicy, ripe garden tomatoes. The bread soaks up the tomato dressing so the salad is fairly dry. The feta and olives try to take it away from Tuscany in the direction of Greece but the basil keeps it firmly in Italy. This is adapted from a recipe published in the July 2011 issue of Cooks Illustrated.

Preheat the oven to 215 C (425 F). Toss the bread with 2 tbsp of the olive oil and 1/4 tsp of salt. Spread in a single layer on a rimmed baking sheet and bake in the oven for 15-20 minutes. Stir it once or twice if you don’t have a fan oven. When it’s lightly brown and toasty remove it and let cool.

Meanwhile, toss the tomatoes with 1/4 tsp salt in a large bowl. Dump in a colander and let drain over the bowl for 15-20 minutes.

Whisk the vinegar and remaining olive oil in the bowl with the juice drained from the tomatoes. Add the bread and some pepper, toss and let sit for 10 minutes, stirring occasionally.

Add the remaining ingredients and toss. Salt and pepper to taste.

You must use a really solid bread here or it will turn to mush. Sourdough from La Brea (available at SuperValu and sometimes Tesco) or Soul Bakery would be great.

Use the best olive oil you can afford. It makes a huge difference.

Leave out the feta and/or olives if you don’t like them.

One Response to Panzanella with feta and olives