“Nollaig Shona Duit” is Happy Christmas in Irish, pronounced “null-ig hun-a dit” or “NO-Lihg HO-nuh ghwich” or “Nullug Shunna it” (my cursory web research did not find consensus). Nollaig, the word for Christmas, is derived from the Latin natalicia which means birthday. Shona is happy and Duit is a singular “prepositional pronoun” meaning “to you.” If you’re addressing more than one person, the appropriate greeting is “Nollaig Shona Daoibh” (NO-Lihg HO-nuh JEEV). Thankfully, celebrating Christmas in Ireland is easier than saying it.

Christmas dawned bright and sunny in Dublin, a rare occurrence according to the Dubs. Bill and I attended a church service at 10:30 hosted by Trinity’s Lucan congregation. Emmanuel, God with Us. I really think we should sing Christmas hymns all year round.

After returning home we had some mince pies with brandy butter and a cuppa tea. We then opened presents. Bill gave me books by two Irish authors: a collection of short stories by John MacKenna and Anne Enright’s 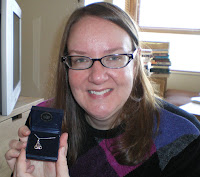 Booker-prize-winner, The Gathering. I gave Bill Roddy Doyle’s Barrytown Trilogy and The Irish Book of Lists–now Bill will be full of fascinating factoids at dinner parties. Bill gave me a beautiful pendant made with pressed flowers and I added a grey wool jumper (sweater) and fleece hoodie to Bill’s wardrobe. I had also wrapped an ornament I bought to commemorate our first Christmas in Ireland. 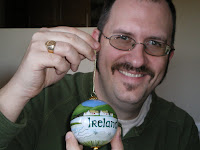 We ate left-over seafood chowder for lunch. Bill read that seafood is traditionally eaten on Christmas Eve (because it is a no-meat day for Catholic observers), so he made a delicious chowder that was even better the next day. I then took a Christmas nap while Bill baked the cornbread dressing and made deviled eggs.

We headed to the Dunne’s around 3:30. Margaret had set a gorgeous table. My picture turned out blurry, but I’m going to post it anyway. 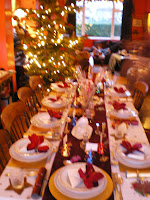 In addition to Kevin, Margaret and their children Nora and Rory, we shared Christmas with another family from Trinity: Nigel, Mary and their son Mark. While Margaret and Kevin worked like mad in the kitchen, we relaxed with mulled wine.
We began our meal with a champagne toast and popped our Christmas crackers. For starter we had baked portabello mushrooms with tomato and rashers. We brought out the deviled eggs also. They were well received, although folks were hesitant to try the ones Bill had sprinkled with ancho chili powder. After starters the food started coming and did not stop. Christmas dinner in Ireland shares many components with Thanksgiving: turkey, ham, stuffing, gravy, mash (mashed 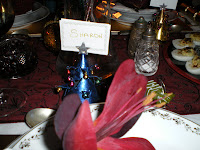 potatoes), baked sweet potatoes (and parsnips–not a Sharon fave), and Brussels sprouts. In addition we had veg stir-fry, mange tout (snow peas), roast potatoes, mashed swede (rutabaga), black eyed peas, spinach and asparagus. Our cornbread dressing is similar to stuffing, but I was happy to have it. We had several choices for dessert also: sherry trifle, Christmas pudding, pears poached in the mulled wine, ice cream and chocolates.

Since physical activity was unthinkable after such a meal, we chose instead to exercise our minds and played an electronic trivia game called Buzz. After keeping 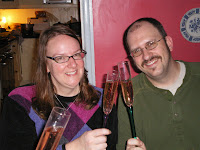 the lead for most of the game, Bill and I were bested in the end by 9-year-old, master of general knowledge, Rory. The rest of the evening we lounged, conversed, stared at the fire (burning coal and a bit of turf) and pet doggies. At 11:30 Bill and I decided we should return home, bearing turkey and ham. (The turkey was the largest I’d seen, 14 kilos or so, and the ham was cured but not smoked. All tasty with leftover dressing.) At midnight we made Christmas calls to the families, and then hit the sack.

I hope all of you had a wonderful Christmas!