Making a Break for Kilkenny Picture of the Day 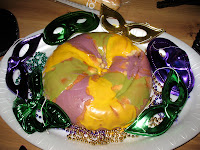 One day every year, if it’s a good year, my husband calls upon the power of yeast and cinnamon to create…King Cake! Who cares if Mardi Gras was technically a few weeks ago. In our apartment, Saturday was the day for King Cake, and all the Cajun goodness that goes along with. This year’s menu included the following starters:

Preparing Cajun food in Ireland requires a bit of extra effort and invention, but when the result is homemade boudin served with homemade remoulade along with made-from-scratch French Onion dip, you really can’t complain. Bill was happy with his sophomore attempt at boudin; he felt it was better seasoned than last (but still using only half the cayenne than the recipe for Irish palate), but may reduce the liver component next year. Wrapped in wonton wrappers, deep fried and dipped in remoulade, the boudin rolls were delish.

The remoulade is a bit of food processor magic where whole grain mustard, yellow mustard, prepared horseradish, ketchup, oil, onion, celery, garlic and lemon juice turn into the loveliest of condiments. The prepared horseradish could have been tricky as we’ve yet to find it in Ireland, but we happened to have some as a souvenir of our January trip to London. 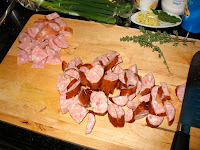 Without access to typical cajun meats like andouille and tasso, Bill had to look to our Eastern European friends and use all-pork kielbasa. For mains this year Bill prepared Chicken and Sausage Jambalaya and Red Beans and Rice. The kielbasa performed very well in the jambalaya. With a slightly different seasoning accent, the smoked sausage could have been andouille. 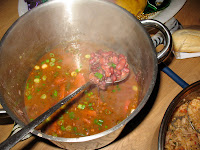 Bill brined the kidney beans for the red beans and rice, and they turned out perfect: wonderfully creamy and tender but not disintegrated. 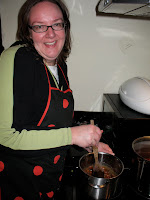 I made some pralines for the party, and as you can see it is quite fun! They turned out really well. I posted on twitter that I was making pralines and got a response saying, “Oh, your kitchen must smell like New Orleans!” I hope so.

Of course, a Mardi Gras party wouldn’t be a party without revelers. Thanks for coming! 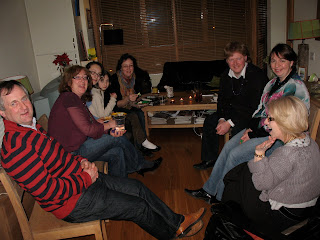