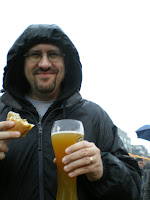 On Saturday, December 20, we did nothing.

December 20th was the first weekend day that we were in Dublin with no house guests since October 18th. Not that our travels and visitors weren’t fabulous, but it was nice to have a day of nothing.

On December 21, we went to a Christmas Market at the Docklands in Dublin. We attended this market last year on a gorgeous, sunny day. This year was soggier, but still a nice time with lots of crafts and a brass band playing carols. We ate bratwurst and drank Erdinger Weissbier.

On Christmas we attended a service in the 19th Century building our church is renovating in downtown Dublin. That afternoon we opened presents and I took a Christmas nap. We had a delicious Christmas dinner with some friends, Graham and Margaret 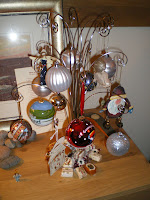 and their family. Bill provided the starter–tamales! Not traditional for Irish Christmas, but they were well received (for the most part). For dinner we had ham, turkey and goose! Veggie accompaniment included Brussels sprouts with rashers and cranberries, roasted root veg, and stuffing. Our friends were house sitting and Margaret was a bit stressed over cooking in an unfamiliar kitchen, but she created a wonderful meal. Her daughter made our dessert, mince pies and gingerbread sandwich cookies with lemon cream. After dinner and Christmas crackers we watched the Dr. Who Christmas special and the new Wallace and 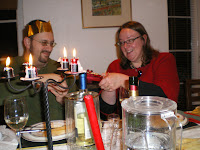 On St. Stephen’s day we ate tamales and huevos rancheros for 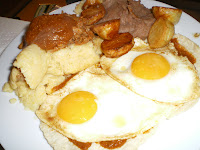 breakfast. For dinner we had Cork Beef and Stout stew, made with mushrooms and Beamish stout. A tasty day.