Ireland in The New York Times Saturday in the park 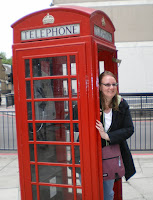 As we were flying to London last weekend I said we should consider our trip a scouting mission for the additional trips to London we will take in the future. We had made no specific plans, just figured we’d figure out what to do once we got there, which in a city like London turned out to be a bit daunting. And although London is full of famous locations, there was no one place that quintessentially represented the city for me. I was interested in it all, and had only 36 hours in which to see it.

We arrived at our hotel around 2:30, after an hour flight to Stansted, a 45-minute train ride into Liverpool Street station, and a hop in the Circle Line to Victoria station. Our hotel was near Buckingham Palace. After our third sandwich of the day–we split one for elevensies, split another at Liverpool station, and thrice so dined when the place where we stopped for waffles was out of omelettes–we decided to stroll through Henry VIII’s hunting ground, Hyde Park. For

those keeping records, a stroll through Hyde Park, with time allowed for lake gazing and squirrel whispering, takes three hours. We exited the park at the corner in Kensington. While exploring the area, we were gleefully surprised to stumble across a Whole Foods! While I may prefer Central Market a teeny bit to Whole Foods when given a choice, Whole Foods is a terrific store. The London store opened last summer, and I think Whole Foods successfully maintained its personality while taking on some European ways. The bread was stacked in uncomfortably exposed piles, as we see in Dublin, and the unrefrigerated egg section offered a mix-and-match option (quail and duck eggs available). We noticed some Whole Foods brands of euro-snacks, such as flapjacks. We were hoping the store might have a Texas section to celebrate its roots, but alas, no. It may have had more tortilla chips than average. I did buy some FAGE yogurt with honey and some oatmeal cookies from the bakery. We ate the yogurt on the sidewalk as soon as we stepped outside. It was dinnertime, so we looked for a place to eat. We were in a predominately retail area, but I spied an awning down a side street. We had a lovely, leisurely dinner at Med Kitchen (a local chain actually) of calamari/chicken with couscous and harissa/pear and goat cheese salad/lamb burger with apricot tabbouleh and cumin yogurt. A short underground trip back to our hotel, and thus ended day one.

On Saturday we headed out around 11:00 and bought tickets for the bus tour. It was almost time for the Changing of the Guard, so we moseyed to the Palace to meet up with several thousand people who had also heard about this royal ritual. After bumping around in the crowd for a while, we spotted a fuzzy hat or two, and a horse. We felt that was enough. The guards were changed in our hearts, and we proceeded to the first stop on the bus tour. Saturday 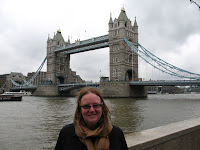 was a rather drizzly day, so our inaugural parade through these famous streets was spent ignobly enrobed in plastic ponchos. Oh my, we saw many famous buildings! After about 90 minutes we hopped off at the Tower Bridge and walked back toward London Bridge along the Thames. (Yes, a previous London Bridge really is in Arizona.) We were looking for the one place we definitely wanted to visit in London–a food market where we hoped to find some Mexican chilies and masa. The Borough Market was 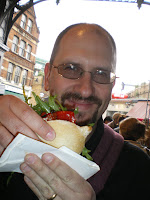 bustling and indeed we did find our ingredients. We also ate lunch. I had very nice fish and chips while Bill had a lamb burger, followed after a respectable time period with a chorizo and piquillo pepper sandwich. Around 4:30 we got back on the bus and came around to the last stop on Buckingham Palace Road.

Friday night we had noticed our hotel was close to the theatre for Wicked, so we decided to book tickets online for Saturday night. We loved it. It’s funny and clever and the two leads were great. I have to confess that I had actual goosebumps during the mid-point climax, and fought back tears at the finale. We ate ice cream during intermission. And the Apollo Victoria is a beautiful theatre. So, a great night. 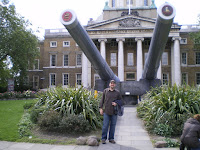 Sunday we again set out around 11:00, checking out and storing our bags at the hotel, and took off toward the Imperial War Museum. By 3:00 we had seen only a portion of the museum, including a special exhibit about Ian Fleming and James Bond. The sections on life during the Blitz were particularly interesting. We wanted to go back to Whole Foods, but on our way there we realized we were out of time, so we picked up our bags at the hotel and started our journey back home.

We’ve decided to plan some return trips to London that are unified with a theme, say, Shakespeare, Sherlock Homes, Royal History, or Rock-n-Roll. We’ll definitely be back. 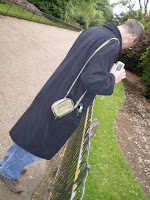 The squirrels in Hyde Park are ridiculously tame. We called several and 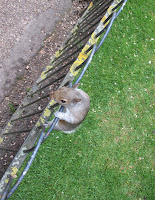 they would come jump on the fence. We felt like Lords of the Squirrels. 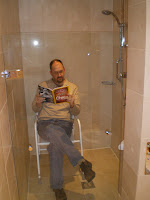 Is that a cozy reading alcove in our hotel room? Oh, no. It’s just the disabled-access shower.