From salsa to carrageen moss

Our neighborhood Mexican joint in Austin, Jardin Corona, sits at the end of an L-shaped strip mall next to a cleaners and a few shops down from an establishment called Shenanigans. JC and Shenanigans patrons frequently pack the parking lot, and pickups park teetering into the ditch. The restaurant is near a fire station and we’ve seen a table of ten fire fighters jump up and run out to their fire truck,  their food waiting on the table until they returned thirty minutes later to finish their meal.

Bill and I found JC not long after moving to Austin. At first we ordered fajitas every time we went, which for a long while was every Thursday.  Eventually we started branching out, sometimes ordering the platters that give Tex-Mex its good and bad reputation. The platters that don’t force you to choose between tacos, flautas and enchiladas and have great names like El Super Tucan. Or we’d get the slightly more sophisticated Mole Pablano or Pollo Endiablado (chicken with chipotle sauce). We loved JC’s refried beans. And their breakfast tacos are terrific. Safe to say, we ate at JC a lot.  And every time, even at breakfast, we ate their chips and salsa, and I can say the salsa varied a tiny bit from visit to visit. I loved that about the salsa and Jardin Corona.

Of course restaurant food should be consistently good, but I find myself charmed by dishes that are slightly inconsistent. It reminds me that someone is making the food. The inverse is not true; I’m not turned off by food that is exactly the same every time. There’s a range I imagine–from the careful attention it takes to turn out perfect, multi-star visual and flavorful art every night to the franchisee who pops open frozen chimichangas. I easily admire the artistes, but I don’t hate the franchise. I like that I can go into any Chili’s and get southwest eggrolls that are exactly the same as any other southwest eggrolls. I love those southwest eggrolls. That’s what Chili’s is for.

But if the salsa is a bit spicier one day, or has more cilantro/coriander the next, then that’s part of the experience of that day. Or if home fries have more onions, or a cannoli has less chocolate chips, it’s fine with me. But home fries have to be identifiable as home fries and not just sauteed onions. At the core of each dish is a recipe, even if the recipe is held in the mind and motor memory of an Italian grandma.

I’m not a cook, so a recipe is like the phonetically expressed phrases in a guide book. Par-lay voo ong-glay. I must pronounce every syllable without taking my eyes off the book. I must follow each step in the recipe as literally as I can. For Bill, a recipe can be more like giving directions to an Irish person. Pass two churches and turn left at the pub. I suspect Bill had a natural sense of how food comes together even when he started cooking, just like the random syllables pick up meaning for him much more quickly than for me when we’re in France or Spain or the Czech Republic. He spent a lot of time teaching me this phrase before our trip to Galicia: Me re-ko-meyn-da oon bwen vee-no del pa-ees. ¿Me recomienda un buen vino del pais? Can you recommend a good local wine? If I lay bleeding in a ditch, at least I could inquire about the local wine. Or more likely ask to kiss a hippopotamus.

The focus on recipes makes Cookbook club a little different from other foodie dinners we’ve attended. The February Cookbook club featured Kevin Dundon’s Recipes that Work, and last month Darina Allen talked to us about how recipes from a cookery school have to work because the students must be able to replicate what they learned in class. When I asked Kevin how it felt to be out in the dining room when his recipes were being prepared in the kitchen, he said it was hard. Possibly because he’s more comfortable in the kitchen, but I do think as much as a chef or cookbook author trusts their recipes, it is hard to let go. And frankly, isn’t it true that even the most carefully written recipe relies on the ability to replicate not just ingredients but equipment and cooking conditions. (I’ve seen my divinity-expert aunt fail at divinity on a rainy day.)  Darina mentioned a recipe that they make at Ballymaloe with homemade yogurt which is much more tart than store-bought variety, so the sugar has to be reduced for the average home cook. We also talked with her about techniques to adjust a dish as you’re preparing it–Myrtle Allen taught her to take a teacup of soup to experiment with before dumping salt into the entire pot! Par-lay voo ong-lay will get you only so far. A lousy cook like me can learn to be a better cook only by cooking and learning the nuances behind sweating onions and a medium crumb. While I enjoy a little variety in my salsa, if the jalapenos are blindingly hot on a given day, I need the salsa maker to make adjustments accordingly.

at the Ely chefs are cooking from another chef’s recipes is a an interesting aspect of cookbook club, as well as the expectation that you can recreate the dishes for yourself. The mains were our favorite part of the Kevin Dundon dinner. I had a Spiced Fish Stew, which could have been spicier, but was tasty nonetheless. Bill’s Oven-baked Poussin with white wine and mushroom sauce was lovely; the chicken was very tender and moist. We both had the Baileys Creme Brulee tart which was an interesting melding the two forms, definitely something that would be easier to cook at home. I had a salad with gorgonzola cheese and honey-roast peaches for a starter. Bill had the crab bisque which tasted nicely of sherry but was missing some crab sweetness. We definitely thought it was better than the crab bisque we’d had recently at King Sitric, which was a Gunter-Lamb family disappointment. 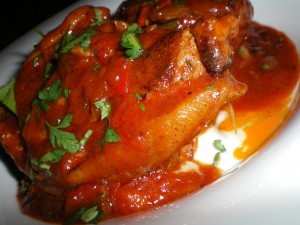 The wild garlic pesto was a nice touch on Darina’s potato soup. (It’s wild garlic season and Bill has been harvesting it in St. Anne’s.) I had salt cod croquettes, which I think retained a bit too much salt. I loved my hake with swiss chard and coconut milk, and Bill’s pork osso bucco was luscious. I liked the baby Brussels sprouts as well. My lemon and rose geranium posset was very nice–smooth texture with plenty of lemon flavor.  Bill’s Carrageen moss pudding with rhubarb was lovely-if you like seaweed, which we do! Actually, the Carrageen moss doesn’t provide any flavor but gives the pudding a nice panna cotta texture. But we do like seaweed.

The next Cookbook club is April 4. We’ve got our tickets!

One Response to From salsa to carrageen moss