Cinco de Mayo (Spanish for “fifth of May”) is a holiday held on May 5 that commemorates the Mexican army’s unlikely victory over French forces at the Battle of Puebla on May 5, 1862, under the leadership of General Ignacio Zaragoza Seguín.  In Mexico it is a minor holiday at best, but in the US and elsewhere it’s a celebration of Mexican heritage and food. Since we have no Mexican heritage, it’s all about the food.

On the menu this year were tacos al carbon with refried black beans. Tacos al carbon are strips of grilled beef (I lack a grill, so these were pan-seared) on corn tortillas with one or more salsas. We had ours with a bit of cheese and sour cream. The steak came from Simply Sourced and was seasoned with smoked serrano salt I brought back from the US. The salsa is a pico de gallo I made with cherry tomatoes, red onion, cilantro and chiles (jalapeño, I think, as the package didn’t say) and a bit of lime juice and salt. The corn tortillas I also made myself. The refried beans were canned black beans cooked down with some onion, cumin and oregano–quick and dirty, but tasty. Topping everything is a light feta cheese that approximates queso fresco. 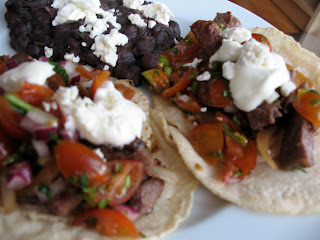 On seis de Mayo (the next day) I made a tortilla soup. I’m recalling what I did for this recipe, so your mileage may vary.

Broil the green pepper in the oven until blackened on all sides. Remove to a bowl and cover. When cooled (about ten minutes) remove the blackened skin and dice. Heat 1 T of oil in a dutch oven over medium high heat. Add the chicken and cook until well-browned on both sides, about five minutes per side. Remove to a bowl. Drain all but 1 T of oil from the pan. To the pan add the onion, carrot and chile, cover and sweat for five minutes. Add the garlic and saute until fragrant. Add the stock, chicken and oregano. Bring to a boil, reduce the heat and simmer until the chicken is done, about fifteen minutes. Remove chicken to a bowl and let cool.  Add the potatoes, Rotel, roasted green pepper, juice of half a lime and half the cilantro. Simmer until the potatoes are done, about fifteen minutes.  Meanwhile, remove the meat from the chicken. When the potatoes are done add the chicken and remaining cilantro to the pan and heat through. Serve in bowls topped with the avocado, cheese and crushed corn chips accompanied by the flour tortillas. Squeeze on more lime juice if desired. 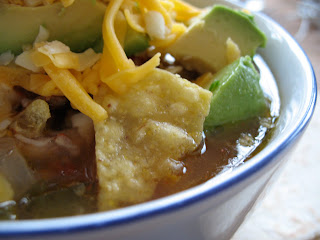 We enjoyed both of these dinners immensely. The tortilla soup was really good: spicy, tart, chicken-y and corny. Simmering the chicken legs in the broth gave even store-bought broth great body. I’ll definitely be experimenting more with this one.