A Brief History of Swans Restaurantstraat 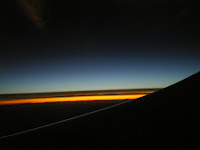 Bill and I flew to Brussels Thursday night. Actually, we flew to an airport outside of Brussels, as we were flying Ryanair (they’ve chosen to identify themselves as “the low fare airline”), and then rode a bus to a metro stop in Brussels city. We bought a ticket at the counter in the airport and were directed to go out and to the left. There was an unlabeled bus standing in 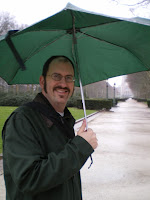 relative proximity to a sign saying “Buses to Brussels City.” We boarded and in few minutes a driver got on, said nothing, checked no tickets, and started the bus. We wound up in Brussels City, so that was good.

Friday dawned rainy with a cold wind. At least, that was the weather around noon when we headed out to the Leonardo da Vinci exposition at the Basilique Nationale de Koekelberg. The exhibit contained many of da Vinci’s works along with those of his contemporaries and students. We really enjoying seeing several of his codexes with notes and drawings. Models of many of his machine and weapon designs were also on display. All the descriptions were in French and Flemish. Luckily an English audio tour was available. 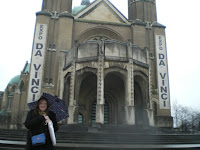 After the exhibit we stopped by a restaurant for a light lunch. We accidentally ordered ice cream. Tasty, but not the best on a blustery, cold day. I really should have reviewed my limited French. Mmm, Dame Blanche. 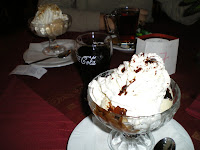 A short time later we found a middle eastern restaurant and successfully ordered falafel and kofta. Friday evening we went to the Grand Place. More on that and the Rue de Restaurants later.