Fabulous and Sun-sational in Howth

Ireland on a sunny day. You can’t beat it.

We had several glorious days in April. The kind that inspire the Irish to strip down to their tank tops and go in search of a sun trap. One such glorious Saturday,  Bill and I spent the morning in Howth (not wearing tank tops) on a Fabulous Food Trail offered in conjunction with the Howth Prawn Festival. I’d seen flyers for the Dublin Fabulous Food Trail in Listons and thought it looked like a fun thing to do. But I was intrigued by the Howth version of the walk, and then followed a fun twitter report of the Dublin walk from Aoife of I Can Has Cook,  so I booked us in. Even though it meant leaving the house before noon on a Saturday.

We had a perfect day for the tour. The day was so perfect that we were compelled to repeat the refrain: This is such a perfect day. It really was. A perfect day.

We met our fabulous guides and fellow tour mates around 11:00 at the historic Courthouse building and then walked up the hill to look out over the church ruin. This is one of the first places we visited in Ireland before we ever considered moving here. (It is also the site of the great sea gull attack of 2008. Gulls are very protective of their babies camouflaged as stones. That’s all I’m saying. That,  and they battle-pooped on Kevin.)

Our Howth-native guide Roisin gave us some history about Howth: its viking inhabitants, the two-day journey from Dublin through Clontarf bandit territory, the ups and downs of the fishing industry, the arrival of the steam packet boats, and the generations-old family knots that identify fishing lines. Then the snacking began. 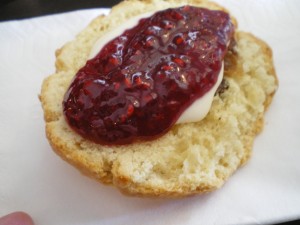 We started with a stop at The House restaurant for coffee and scones. Bill and I had a lovey meal at The House once, but I have to say the thing I remember most was the woman next to us freaking out about having bones in her fish. She had ordered a whole fish. Also I remember Bill being very excited about salsify. The House offers a single course meal during the week called Dinner for a Tenner and they host Jazz Dinners on Wednesdays. The Saturday brunch looked really nice as well.

Next we visited Ray Collier Butcher shop where Ray told us about the cattle they are raising on Lambay island. Organic, fed on grasses and herbs, the meat actually has an increased salt level because of the proximity to the ocean. They were ready to bring the cattle in for slaughter, but were waiting for the tides to be right to retrieve the cows. 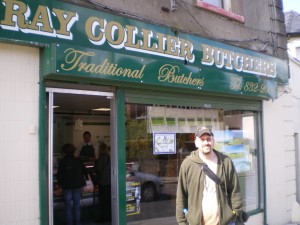 Then we visited Ella Wine Bar for some prawn salad on toast. Ella has lots of fun wine dinners, and they also have jazz evenings. We are now on the mailing list! We’d worked up a thirst by then, so it was well timed that our next stop was a wine tasting at The Winehouse. The owner had put together a tasting of three very accessible and affordable wines: a Prosecco, a Pinot Grigio and a Nero D’avola. Fortified, we visited The Country Market, a well-stocked food store with a cafe upstairs. Joe, the owner, generously served us a dessert trio of carrot cake, chocolate brownie and fruit tartlette.

Next we we were invited into the studio of Howth artist Una Sealy. Una’s studio is in the garden behind her house, so our little band of tasters traipsed through her front hall and her lovely, sunny kitchen, past a congregation of potted pants, along a stone walkway, around a sleeping cat into a delightfully cluttered studio.

Una talked to us about what she loves about Howth and the scenes of Dublin Bay, her tendency to let people wander into her landscapes, her efforts to capture the fleeting beauty of nature into a more lasting form,  and the state of being annoyed with the shape of Ireland’s Eye. She told us the stories behind several paintings and showed us some paintings in progress. Una starts with a brown-toned image and builds up the color. The painting-in-progress below is of Howth rooftops looking down toward the water.

And of course she offered us some smoked salmon from Nicky’s Plaice (on a plate Una painted of scenes from San Francisco). Nicky’s is the choice of Howth locals. It’s where they fish, Roisin told us. 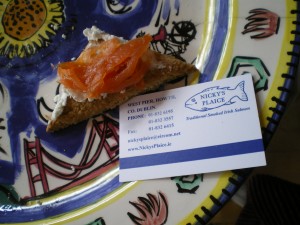 Our final two stops were a slice of pizza from the new pizza oven at the Centra and a wee glass of Guinness at The Abbey Tavern.

After the tour we checked out the Taste of Howth event happening as part of the Prawn Festival. There were about ten restaurants represented and everything smelled great, but I confess after spending the morning being welcomed into various Howth establishments with a warm smile from the owner and a plate they had prepared for me, the lines and busyness of the tasting was a bit of a drag. But it was still a perfect day, and the dishes we managed to procure with our Prawn Punts were tasty.

The Fabulous Food Trail ladies are adding Howth to their regular schedule, but Una won’t make a regular appearance. Visiting her did seem like a special event and was a highlight of the day. But even without a visit to the studio, the Howth trail will be a fun excursion, especially if you have a perfect day.

There wasn’t too much more to the Prawn festival except for some carnival rides, so we decided to grab some fish and chips from Beshoff’s and then visit Nicky’s Plaice on the way home. It was about this time that the perfect day was threatened as rain clouds filled up the sky. We could see rain falling nearby, but only a few drops fell in Howth. I hope the Prawn festival continues to grow, and takes on my suggestion for a Prawn Queen contest. Can you just imagine the crown with sprouting prawn eyes and antennae and the lovely segmented, prawn-pink cape with claw clasp? I think my friend Louise and I will enter. As she said, she’s always wanted  an exo-skeleton.

Keeping the prawn spirit, we bought some Dublin Bay Prawns at Nicky’s Plaice for our dinner.

After our Crackbird field trip,  my work mate Barry and I made our way back to work through St. Stephen’s Green. The green is one of my favorite spots on a sunny afternoon and I love participating in “the lying upon the grass.” The green was chock full that day and it took a large dose of adult responsibility to return to the office. I asked Barry to snap my pic and a friendly tourist asked if we wanted one together, so here we are, the happy business analysis team mates. 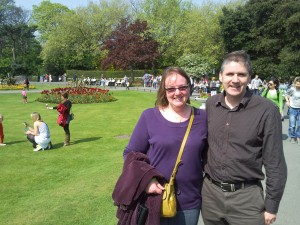 Sunny days call for patio dining, so it happened that I had lunch at Tiesan Cafe on consecutive, sun-drenched days last week. On my first visit I had my standard Eggplant/Auburgine sandwich, and so the next day I branched out and got the lunch special–a ham and cheese omelet. The omelet was light and delicious with the salad greens. Roll on Summer! (Which according to Irish seasons started yesterday.) 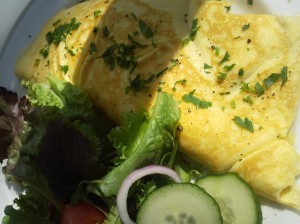 3 Responses to Fabulous and Sun-sational in Howth