Spice up a classic: Mole Brownies Fabulous and Sun-sational in Howth

A Tale of Two Pop Ups 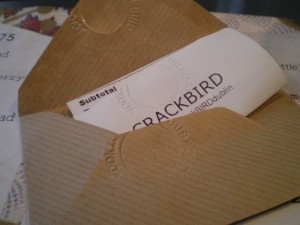 Word of Crackbird is getting around and I’m hearing accounts of visits to the ephemeral chicken shack on Crane Lane. The lure of limited time only is certainly working for me. Several dining decisions have been finalized by saying, “Well, if we want to go to Crackbird, we need to go now. Won’t be here forever.” That’s why I loaded a crew of co-workers into a mini-van taxi for a field trip to Crackbird for lunch on Thursday.

Consensus is that Crackbird turns out tasty chicken. I’ve settled on the wings, which come only in the Soy Garlic version, as my favorite. It’s a dozen whole wings and is plenty to share. The sumptuous Soy Garlic doesn’t really need a sauce, which is a shame as I’m a fan of dipping and the attractive array of sauces are tasty (try mixing the feta and jalapeno).  A few items have been hit and miss–coffee cake was delicious with creme fraiche (evoked Southern US to me), but the ginger cake was dry; twice the slaw was really bright and refreshing, but this last time weird (flavor proportions were off). But after three visits I’d still happily return. Because it won’t be here forever.

I love the casual fun of Crackbird. The free food tweet seats we enjoyed our first visit. Picnic tables and and jars of rhubarb lemonade and handmade napkins. The simple presence of cloth napkins shows that Crackbird may be a pop up but it is not slapdash. It’s thought out and constructed to provide a certain experience–an experience I’ll happily consume. On a recent Sunday afternoon as Bill and I awaited our bucket of bird, he lifted his Pilsner Urquell (they were out of Double LL cider that day) and said, “You know, if this were a Shiner, I’d be in Austin.” He was spot on. Crackbird is quirky, but it’s the kind of quirkiness that lives in service, ultimately, to the food (along with admittedly some self-knowing hipness)–a vibe that we know as Austiny.

I’ve wondered if Crackbird would hang on longer–a final final tour if you will. Your man did say that they would be closing, but when we asked where he’d be going next he said it’s more what will he be doing next. And that, he said, he couldn’t tell us. I’d love to see Crackbird pop up every summer. Maybe if the food trailer concept ever makes it to Ireland. That would be brill.

A few weeks ago Bill spotted the following notice in the Irish Times Food file:

Galway comes to Dublin : The pop-up phenomenon continues, with the arrival a one-night-only restaurant in Dublin’s Hibernian Club on St Stephen’s Green.

It will be run by chef Martin O’Donnell of the Twelve Hotel in Barna, Co Galway, who won last November’s Bord Bia Just Ask commendation. For the night of Tuesday, April 12th, a 20-seat pop-up will showcase the local ingredients that O’Donnell uses in his cooking, such as McGeough’s air-dried lamb, Galway Bay scallops – diver-caught by the hotel’s general manager, Fergus O’Halloran – served with Barna sea vegetables and wild rabbit. The dinner is priced at €95 including wine pairings, and places can be booked by calling 091-597000.

Within minutes I had called the mysterious number and talked to several people with no clue about any pop up restaurant. But I shortly received a call back 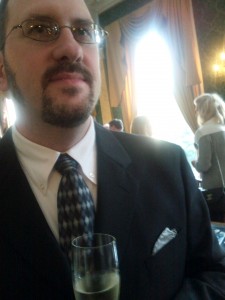 and we were booked in. Then the questions began–What does one wear to the Hibernian Club? Are they really selling only twenty tickets? Who is this McGeough fella out there air drying lambs?

We settled our wardrobe questions fairly easily and made plans to meet at the Hibernian Club. Taxi, please. Yes, to the Hibernian Club, located on St. Stephen’s Green since 1840. I had received a call inviting us to a reception before dinner, so we arrived shortly after 7:00. We were directed upstairs to the Reading Room which overlooks the green and already contained at least twenty people. We theorized then that the twenty tickets represented twenty in addition to club members.

The Prosecco was flowing freely and we had three glasses along with a shrimp canapé before moving downstairs to the dining room. Bill and I were seated at a table for two by the front windows. The dining room was full with approximately 60 people, and we were on the low end of the age range. A feat when you’re in your 40s. What ensued was a terrific dinner of West Ireland ingredients, but I’ll tell you right now, this was no pop up. I appreciate the notion that you could pop up within a 150-year old establishment, but you would have to pop up pretty hard: Sneak in in the middle of the night, have a fish fry in the snooker room or a menu made entirely of bourbon and cigars. The clincher was when I was told, very kindly and politely, that texting was frowned upon in the dining room. No self respecting pop up would ban tweeting!

That being said, I think it was a smart idea to bring the West restaurant to Dublin, and also smart for The Hibernian to open up the dinner to non-members. The serving staff, a combination of West restaurant and Hibernian employees, were outstanding. Our dinner was delightful. The glasses of delicious wines were generous. One regret is there was no discussion of the wine pairings. I think the chef intended to make a appearance earlier in the evening to describe the dinner and wines, but we didn’t see O’Donnell and his two assisting chefs until well after dessert when we were about to leave.

The standouts for me were the rabbit croquette and the lamb pie. (I am at my core a casserole girl!) The croquette contained some rabbit liver and was luscious but not heavy. And it was fried. Yum. I could have eaten much more of the leeks, and the Atsina was a nice licorice-like bite. The little lamb pie was so cute with a rich-tasting crust and intense lamb flavor. And it was garnished with a slice of air-dried lamb. McGeough, you’re a genius! The air-dried lamb was procuitto-like, as I expected, but also very spicy. Must buy McGeough air dried lamb.

The scallops were perfect as well. Bill and I reflected that scallops are a unique combination of sweet and meaty. An interesting outcome of advertising that the West restaurant serves diver-caught scallops is that the manager and scallop diver, Fergus O’Halloran, learned that it is illegal to harvest scallops using scuba gear. They can only be harvested by free diving. Or by dredging apparently.

After our experience with the West restaurant road show, I’d definitely seek them out when in County Galway. A lovely meal, especially for a Tuesday.

3 Responses to A Tale of Two Pop Ups