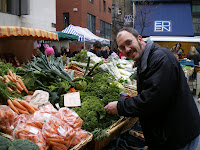 Yesterday Bill and I visited the food market downtown in Temple Bar. As expected, we found tasty goodness. We had a progressive lunch of a veggie empanada followed by miso soup for me and a sausage with onions in a bun for Bill. Bill ate some raw oysters. I ate one–if “to eat” is the proper verb for something that slides down your throat on its own volition. I would have preferred them after a few minutes under the broiler. 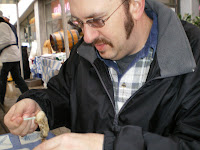 We brought home some lemon poppyseed bread, Italian sausage, olives, kale, endive, oyster mushrooms, spring onions and and finger-shaped avocados called cocktail avocados. These seedless avocados occur when an avocado flower is not pollinated normally. I bought some apples grown in an orchard in North County Dublin, our neck of the woods. I told the apple vendor that I like to eat apples with peanut butter. “How do you do that?” he asked. “Just slice an apple and smear on peanut butter,” I explained. He was incredulous. “I just don’t see how that would work out!” he said. After the outdoor market, we bought spelt pasta and cannellini beans at an Italian market.

We also picked up noodles , veggie and seafood stir fry, and pork/cabbage buns at the take away counter in a Chinese market. Along with some chips from Leo Burdock’s, the Chinese food completed our culinary tour. 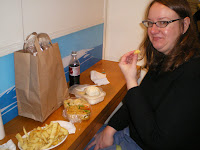 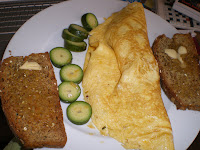 Bill made oyster mushroom omlettes for lunch today, served with cocktail avocados and brown bread. He is currently creating a delicious dinner using the pasta, sausage, kale and cannellini beans.

In other food news, Bill recently attempted his first Irish roasted potatoes. These crispy outside/fluffy inside 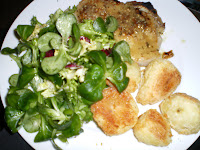 potatoes are ubiquitous on proper dinner plates across the country. This preparation represents Ireland’s commitment to the perfect potato. The potatoes are first par boiled, then shaken inside the pot, removing the outer layer until they look fluffy. The potatoes are then placed into a heated pan of oil (or goose fat, which is readily available at the grocery). Forty minutes of baking, and you’ve got tasty potatoes. Of course, to be authentic, you better have mashed some potatoes as well. Bill’s potatoes turned out great. We ate them with pork chops in a mustard thyme sauce.