Malahide, Migas and Milk (hot, with chocolate) My Fair City

Saturday night we went to dinner at Aqua in Howth. We arrived in time to enjoy the sunset over Dublin Bay and also to order from the Early Bird menu. Early Bird options occur frequently on Dublin menus, typically a three-course Prix Fixe, and are attractive to diners far from retirement. Aqua’s Early Bird offered three courses and a bottle of wine for €65 per couple. The four adults took advantage of this option, while the resident 8-year old chose buttered pasta with parmesan, and an improvised Shirley Temple.

Kent had the best appetizer, a salad with chicken and a quail egg. Tracy and I had fried calamari, mostly tender, but could have been crispier fried, in my opinion. Bill’s seafood chowder was tasty. Bill and Tracy had salmon with Savoy cabbage for entrée. Kent had a steak on bean cassoulet and salsa verde and I had haute fish and chips. 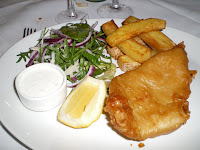 Desserts were beautiful and tasted good too. Bill’s orange mousse roulade was probably the best, Kent’s cheesecake the weirdest, and Tracy and my lemon tarts the tartiest. Kayleigh’s trio of homemade ice cream was delightful, but chocolate sauce accents can be tricky when they look like part of the plate design! 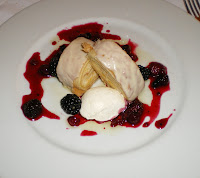 After dinner we looked at some charcoal drawing in the lounge. The artist was one of our fellow guests last weekend in Wexford. The lounge was lovely and we considered lingering in front of the fire, but we decided instead to head out into the cold night to catch the DART. 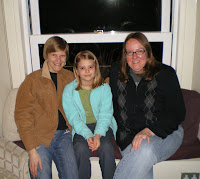