Grande Place Garlic is not Gaelic

Tex Mex was a common after-church lunch in Austin for us. Whether at Chuy’s or Mesa Rosa or La Margarita or any number of other at least decent places, we knew we could find enchiladas and tacos to assuage our cravings. Not so here. The Epicurean Food Hall near the corner of Middle Abbey and Lower Liffey has a pretty authentic Tex Mex place, but that is the only place we’ve dared to try. And unlike Austin, every corner here does not have a Tex Mex restaurant. Howth boasts of a Tex Mex joint called El Paso, though, and we’ve even seen a show on a public access channel about it where they talked of importing chiles and using authentic recipes. So, our Tex Mex cravings in full force, we set out on Sunday after church for Howth.

Our cravings weren’t assuaged, and my wallet was much lighter than it would’ve normally been after lunch in Austin. Chips and dips, which included a basket of warm chips and four pots with sour cream, queso, salsa and ranchero sauce, was €13. $20 for chips and salsa, something we’re used to being free, and the salsa and queso weren’t that good. For mains Sharon had a chimichanga and I a beef taco. Each was around €19 ($27!). Sharon pronounced the chimichanga “mild, vaguely familiar, but not outright offensive.” My taco was at best weird: a soft flour tortilla smeared with refried beans, topped with a crunchy flour tortilla filled with stewed beef and cheese. It was like a haute cuisine version of that double-decker taco from Taco Bell. Again, not offensive, but neither was it Tex Mex. All in all it seemed to me that this was Tex Mex from someone who has only read about Tex Mex and not actually tasted it. I left with a new dream to open an authentic Tex Mex restaurant in Dublin. 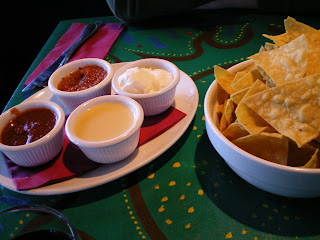 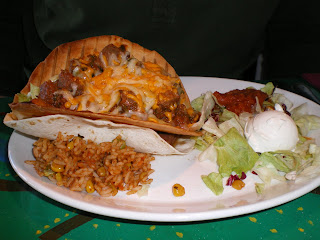 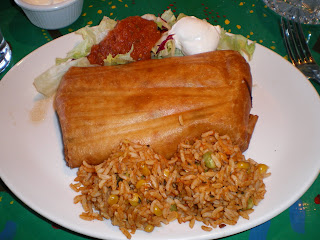 Sharon’s friend Helen, who is in Austin on a business trip, is bringing back to us dried chiles procured by our friend Lisa. Soon I will be making pork and potato tacos (tacos de puerco y papas al guajillo) and corn tortillas, and the cravings will be silenced for a time. Until they cry out for tamales.