Carluccio’s is back! The Music Scene

Saturday in the Kitchen with Bill

It’s official: We have a Saturday routine.

After a bit of a lie in, Bill gets up around 10:00 to watch Saturday Kitchen. I usually wander into the living room by 11:00. Saturday Kitchen is a bit of an institution, which is evident by the number of mentions in the twitterstream during the broadcast. The show features in-studio cooking demonstrations by visiting chefs, as well as dishes prepared by the host James Martin. James is a polarizing force in the world of television hosting, with distinct pro and anti camps. We’re both pro. I think he’s an excellent host, very adept at describing what he’s cooking and chatting up the celebrity guest* at the same time.  Saturday Kitchen also includes clips from a variety of other BBC cookery** shows by the likes of Rick Stein, Keith Floyd, the Hairy Bikers and sometimes even our old Fat Lady friends, Clarrissa and Jennifer. The Omlette Challenge which pits guest chefs in a timed egg match is surprisingly entertaining. One benefit of watching Saturday Kitchen is that we’re now familiar with many of the British chefs of the moment.

After watching 90 minutes of food being prepared, Bill makes his way to the kitchen to produce some kind of amazing brunch. Recent creations are pictured below. 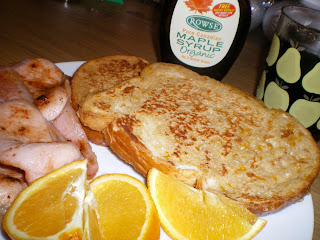 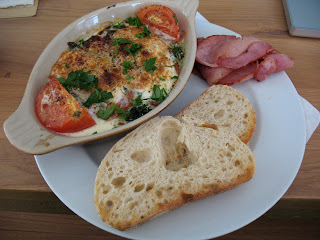 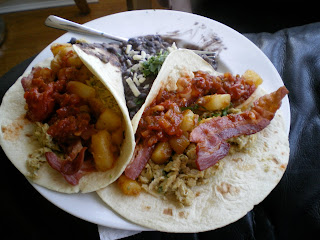 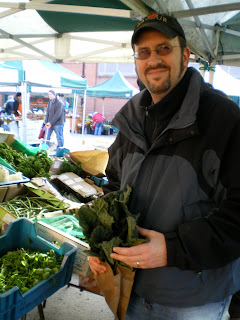 Most Saturdays Bill pays a visit to the Red Stables Market*** in St. Anne’s park.  I frequently accompany him. The market is one of the reasons we love our proximity to St. Anne’s. It’s a small market, but contains all the major tasty groups: organic meats, cheeses from Sheridan’s, various ethnic foods, tempting breads from Soul bakery, and organic fruit and veg from Duncan at Organic Delights. Sometimes Duncan has amazing surprises like tomatillos or white onions.

Bill comes back from the market inspired to cook wonderful things. For example, the cavolo nero in this photo (above) was featured in pasta along with garlic, pancetta,  and cherry tomatoes. 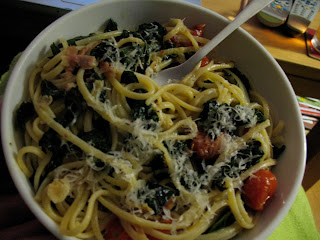 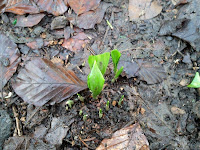 Recently Bill has been keeping an eye on the wild garlic growing by the river.

I guess it makes sense that our Saturdays, like our holidays, revolve around food. Happy Saturday everyone!

Hey, Bill just came back from the Market with Scallops! Yum.

* Guests are of some noteriety in Britain, which means we often have no idea who they are. My favorite guest: Len Goodman.
** They say cookery here.
*** If you have four minutes, watch this video I found with scenes of Red Stables market, with a few misspellings, set to a slightly annoying soundtrack.