Alhambra The spice burger is no more 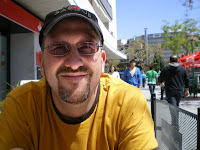 We arrived in Granada on May 2 just in time for siesta. The timing was perfect as we had been up since 4:30 for the 7:30 flight. We flew into Malaga, arriving around 11:00. We took a bus to the bus station, and then ate lunch at a sunny sidewalk cafe–meatballs and hand cut fries, preceded by a salad of greens with canned tuna and olives, followed by cafe con leche. Total €18.00.

While we were eating a man in a blue dress shirt sat at the table next to us. When I glanced at him again, the tie was off and his shirt was unbuttoned to his sternum. He drank a coffee and ate some buttered bread before picking up his briefcase and departing, buttoning his shirt and arranging his tie as he went.

Our skin was already turning pink after an hour, when we boarded the bus for Granada. The two hour trip took us into high hills with scrubby brush, not unlike Central Texas. We drove past groves of olive (or possibly almond) trees and stands of tall, straight poplars planted in tight rows.

After our nap at the hotel we walked over the Rio Genil into Central Grenada. We passed several 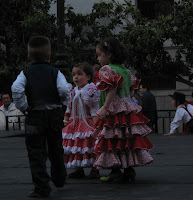 bars packed with people watching a match. We walked through the Plaza del Carmen where a large stage was covered by adorable girls in traditional dresses. We had arrived in Granada during Dia de la Cruz, the Day of the Cross. We sat in the square for a while and watched the girls dance Sevillanas, a type of Flamenco traditional to Andalusia. The dancers curl their arms through the air above their heads, and follow that movement with their hips, while shaking their frilly skirts and stomping their feet.

Looking for dinner, we wandered down a street filled with sidewalk tables. Some of the restaurants were full, others deserted. I created a restaurant selection logic like this: Choose the first place you see with just one empty table. This restaurant was Casa Jose. 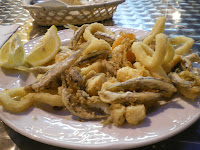 Bars in Granada have a wonderful tradition of serving a free tapa with every drink. Our gratis tapas at Casa Jose was fried sardines. We also ordered a plate of fried seafood which contained more sardines, calamari, shrimp and bacalao. My first encounter with bacalao in Barcelona was, shall we say, slimy. [Although Bill was okay with it.] This bacalao was seasoned with oregano and fried. The bacalao balls were the best bites on the platter. 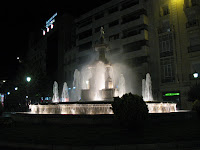 After dinner, we wandered around and got some ice cream. The next morning after a large breakfast at the hotel, we headed toward the Alhambra.