Driving into Brussels on the airport bus, we felt like we could be approaching any American city. We were in a left-drive vehicle on the right side of the road, rolling past sprawling office 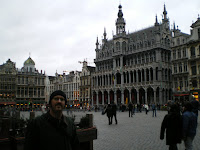 complexes, shopping centers, car dealerships, and a nuclear power plant. The city itself is an interesting integration of history and modernity. Skyscrapers loom on the horizon when viewing the back garden of our B&B, but out the front door is a narrow street of homes built in the late 1800s. The massive front door is unlocked by a thumb print reader. Efficient, orange trains whisked us below cobblestone 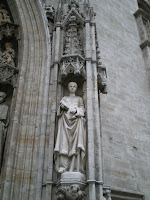 Once in the city, however, we felt that we had arrived someplace different from whence we came. Someplace old. Everybody talks about the Grande Place in Brussels, and it is indeed spectacular. It is the very definition of super-crazy-ornate. Complex carvings and statues cover the stone buildings, their fantasy-castle spires puncturing the sky. These buildings date from the 15 to 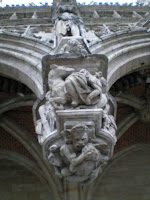 18th C. In addition to the town hall, the square is bordered by imposing guild houses. These houses were built during times of great prosperity when various trade guilds wanted to be present in Brussels to influence trade and city administration; these huge structures were built to show their wealth and influence. Oh, to be a baker in 17th century Brussels! (Seriously, this 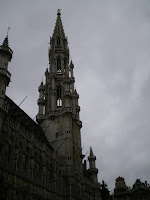 is what the WGA should be striking for. Internet residuals and a gothic club house.) Some additional buildings housed royal administration, while some were private residences. Although many buildings were updated or restored over the centuries, the overall architectural style has been maintained, leading UNESCO to praise the square’s “remarkably homogeneous body of public and private buildings, dating mainly from the late 17th century. The architecture provides a vivid illustration of the level of social and cultural life of the period in this important political and commercial centre.” 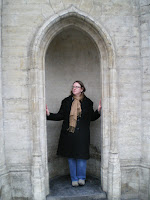 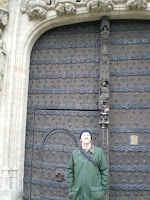