Our Journey to Morcilla

On our first trip to Spain we visited Barcelona. We came home raving about grilled squid.  Next we went to Grenada and Malaga and were introduced to Tinto de Verano. Last year we visited Galicia and experienced Padrón peppers. Common to all our trips was an increasing appreciation for bacalao, an immediate addiction to jamon iberico, and the lovely refrain of “Dos más caña, por favor.”

We were in Madrid for a week at the beginning of the month, and again Spain rocked our culinary world. This time it was the morcilla. Spain’s black pudding.

We’ve been on a slow journey toward black pudding. Americans are squeamish about it. I think somewhere in our cultural heritage black pudding was used to separate us from our British forebears. Young children were rocked to sleep at night to their mothers cooing, Aren’t you glad you’re independent of the British Empire, with all that cricket, and royalty, and heavens, they even eat pudding made of blood! As a kid my images of blood pudding were disturbing indeed; knowing only American pudding, I would imagine bowls of cold, congealed, bloody goo.

Those thoughts hadn’t fully left me when we arrived in Ireland, but of course I wanted to engage in the Full Irish Breakfast experience, so I tried the round of black pudding on my plate. It was okay. More like a breakfast sausage patty than a hematoma. Not disgusting, a little bitter. Nothing special. So I ignored black pudding for a while and Bill would buy only white pudding for our (only occasional) fry ups.

Sometimes Bill ordered dishes with black pudding in restaurants–chicken stuffed with French Black pudding at Restaurant 1014; a chorizo, potato, and black pudding starter at The Winding Stair. Those were both tasty dishes, so I decided that black pudding was nice as an ingredient. It was fine in a group of friends, but you wouldn’t really want to hang out.

Then it seems that everyone on twitter started talking about black pudding and I heard tale of creations such as black pudding with chocolate and pistachios. Fellow expats who had once spit out a black pudding canape happily attended a dinner hosted by Clontakilty, a name synonymous with pudding. A black pudding renaissance was underway.

At the O’Brien Chop House in Lismore last Spring, I ordered a black pudding dish, the classic combination of scallops with black pudding. An absolutely perfect pair–the earthiness of the pudding meeting the sweet sea of the scallop. The next thing I knew I was at Sheridans Irish Food festival watching the three big names in Irish black pudding–Jack McCarthy, Ed Hick and Tom Doherty–make black pudding from scratch. I even tasted the black pudding before it was cooked. When it was still red. I had crossed over. 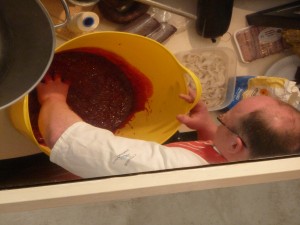 We brought home some Tom Doherty’s terrific pudding, we really like his spicing, which Bill prepared using a Nigel Slater recipe for Black pudding with mustard cream sauce. Since then we’ve tried every variety of black pudding we’ve come across, including a lovely, mild loaf of black pudding from Inch House. 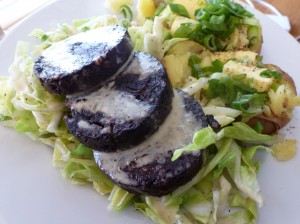 And so we found ourselves on a warm evening in Madrid, on our second bottle of cider at the Asturian Sidrería down the street from the apartment (the cider ritual was another new experience), having already consumed a plate of charcuterie with the most ruby red jamon and a pile of  Padrón peppers, when we were enticed by a plate passing by to the next table. “Huevos,” I said dreamily. “With Morcilla, I think,” Bill said, “black pudding.” Moments later we had our own plate, and we found yet another Spanish food to love. We think it’s the cumin that makes this black pudding delectable. It’s crumbly, and made with rice. Served with fried eggs and fried potatoes, this dish is killer. We ate morcilla at every opportunity, in bocacillos, in pinxtos, and even returned to the Sidrería to eat their huevos rotos con morcilla one more time. 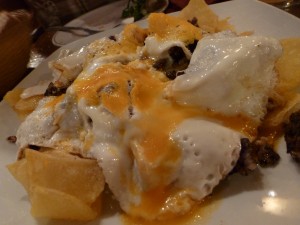 The eggs may appear to be the star, but the morcilla is what blew us away.

“How can we have been to Spain three times and never had morcilla?” I asked, amazed and a little indignant. But then I understood what Spain had known all along: We hadn’t been ready.

10 Responses to Our Journey to Morcilla