Blackcurrants are back! What We Did Last Summer 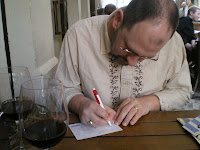 It’s been three months since our trip to Southern Spain. Years ago, three months wouldn’t be an unreasonable amount of time to wait for a written account of travels on The Continent, but in these times it’s an almost unforgivable expanse. So imagine you’re reading these words on onion skin air mail stationery and dreaming of the next time you’ll hear my voice.

Spain has been a wonderful surprise for Bill and me. Back in the era before I traveled Europe freely, Spain was not on the short list of places I intended to visit if I ever lucked into 10 days across the sea. But this season, generous with sights and sounds and flavors, has taken us beyond all expectations, and now we know–we love Spain.

We’re particularly drawn to the balance between food and drink embodied by the tapa. Little bites to accompany refreshing beverages. Compared to Ireland which, I’m afraid, loves its drink more than its food, Spain seems to love them equally, and better yet, doesn’t ask you to choose.

I’ve already described some of the wonderful flavors we encountered in Granada, and we continued to eat well in Malaga. Our first night we wandered the entwined streets looking for seafood. Not a difficult hunt, we quickly found some calamari, fried shrimp and manchego.

Tuesday morning we had breakfast at Cafe Moka, adjacent to our hotel–cafe con leche and pitufo (small) sandwiches. I had sobrassada and cheese and Bill had Spanish tortilla (tortilla de patatas).

We then visited a market full of veggies and fruit and cured meat. We kept seeing bowls of orange goo labeled Lomo en Manteca–we would find out later what it was. We picked up a few snacks–skewers of marinated anchovies, pickled onions, olive and pickle (loved these in Barcelona), and some empanadas. We enjoyed these later on our balcony. 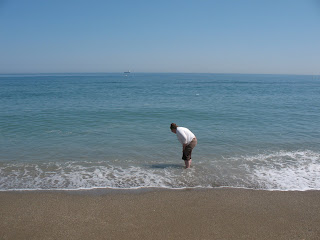 Later we walked down to the beach for lunch. We had some gazpacho–gazpacho originated in Andalusia–and I ordered grilled squid. I had been profoundly changed by the grilled squid I had in Barcelona; the grilled squid I had here was a bit bigger and filled with goo, but the non-goo parts where tasty and I could watch a guy stick the squid on the end of a pole and grill it over charcoal, so that was cool. We also had some tortillitas and Bill had gambas al pil pil (spicy shrimp).

After lunch we waded a bit in the Mediterranean and relaxed on the sand. We returned to our hotel for siesta–the air had been turned on and we napped in cool comfort. That evening we started dinner at Gorki, a wine bar which is a chain, but seemingly popular with the locals. We wrote some postcards and ate jamon iberica and a wonderful salad with blue cheese and wilted leeks.

Our next stage of dinner was at La Rabana where we dined on figs and more jamon iberica (it’s so great!), a black pudding sandwich, and yes, Lomo en Manteca! Pork in lard–delicious! 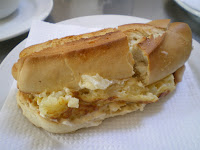 Spain had been so kind to us with its gentle sun, fragrant orange blossoms, and marvelous flavors. We were really reluctant to leave and wished we had planned to stay for the whole week. I knew we’d be glad to have the days for a later trip (for oh, say, Slovenia), but it was hard to leave.

Wednesday morning we returned to Cafe Moka for a bittersweet cafe con leche and more of the amazing tortilla pitufo. Click here for more food pics.

And we did do a few things between meals, other than siesta. Click here for more scenes from Malaga.