Sunday November 8 was our second day in Würzburg, Germany. A gray day, but not horribly cold. We walked along the River Main, enjoying the scenic spot at the 18th C Alter Kranen (Old Crane–used to load boats on the river), with views of the Marienberg fortress and the Old Main Bridge.

We proceeded to The Residence, a Baroque palace of the Prince-Bishops of Würzburg. The construction and decoration of the palace, beginning in 1720, spanned five Prince-Bishops with varying priorities for completion of the palace, which occurred finally in 1781. Napoleon apparently called the Residence “the nicest parsonage in Europe.” The residence was heavily damaged in a bombing raid in March 1945, an event obliquely referred to on info placards as “the fire.” Restoration of the palace began soon after the war and lasted until the 1980s. The palace rooms range from grand to spectacular with Bossi’s intricate stucco of the White Hall, the gilded Imperial Hall with striking murals whose characters seem to step into the room, and the beautiful frescoed ceilings of the staircase landing. In addition to the grandiose ornamentation, I particularly loved the lovely patterns in the parquet flooring in many of the apartments. 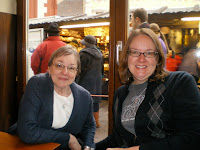 After touring the residence and grounds we walked back to the Marktplatz and popped into Café Schönborn for lunch. We then visited Würzburg Cathedral, a Romanesque cathedral dedicated in 1188.

For dinner we decided to stick close to our hotel, visiting a cafe/bar two doors down. Bill had read Pleicher Hof was a college hangout, and indeed I believe the combined age at our table equaled all the other customers. Pleicher Hof’s website had said that a viewing party for Polizeiruf 110 would start at 8:15, and sure enough at 8:15 every table had filled and the room fell silent as the show began. We had no choice but to watch this police procedural in German, and wait for our schnitzel, which was the only item still available from the menu. We gathered that there had been a murder, which somehow involved a young cop. And a hedgehog. The case led an older, one-armed detective to quit the force, and then it was Christmas. Our schnitzel expectations were low, but unfounded–our dinners were delicious. I had jaegerschnitzel with spaetzle. A terrific plate of food, and a fun evening.