I’ve learned a bit about carciofi alla giudía since I first tried one on Friday.

I had heard about fried artichokes, but it wasn’t until I saw the waiter carrying a golden brown flower across the room that I realized how much I desired one. What I wasn’t sure about was how to eat it.

When my bloomin’ carciofi arrived I started munching the crunchy petals.  “Can you eat the leaves?” Bill asked. “Um, I guess so,” I said, my mouth full of crispy artichoke. In the moment I had forgotten completely that artichokes are usually broken down into tiny spoons with a tasty bit scraped off of each tip. “If you can chew it,”Bill said, “I’d say you can eat it,” establishing a new culinary maxim. (Well, it was true in the moment at least.) So we crunched away on the tasty artichoke chips, which provided a great contrast to the juicy heart. And the waiter didn’t look shocked when he collected the empty plate.

I later looked up a carciofi alla giudía recipe and learned that the harder outer leaves are trimmed before frying. And all was confirmed when I saw vendors trimming artichokes  at the market yesterday. 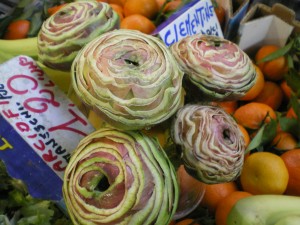 It’s artichoke season and the market was piled high with crates of artichokes still on their stems with large dark green leaves. In addition to trimming artichokes into these lovely blooms, I saw a few vendors shredding the stems.

Like so many things, artichokes taste great deep fried, and you can eat the whole thing.