Guinness moving back home Working Nine to Half Five

Before moving to Dublin, Bill and I discussed the need to avoid too much of a routine, to try to keep a bit of the tourist about us, as locals can become blind to the historical, architectural, and museum-ical goodness around them. We joke with our friends here that we’ve seen more o 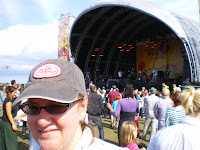 f Ireland than they have. But, still, the majority our days are comprised of work, eat, a little telly, and sleep. Thankfully, we have the weekends for a bit of variety. Here’s a bit of what we’ve been doing on our days off.

In late August, Dún Laoghaire (Leary) hosts a Festival of World Cultures that features a variety of food and music. Dún Laoghaire is a lovely suburb south of Dublin on the coast, about 45 minutes away via DART. The Saturday of the festival turned out damp and g 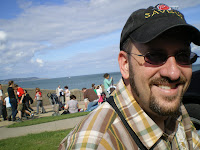 rey, but Sunday was a sunny delight, so we headed to Dún Laoghaire, along with everyone else in Dublin. The festival was very crowded, so while we did see and smell a wonderful assortment of culinary offerings, we didn’t want to spend all afternoon in queue. We managed to procure some falalfel and paella, which were both yum. After eating we maneuvered through the crowd to the main music stage to hear a klezmer band called The North Strand Klezmer band. They were great. If I ever pick the clarinet back up, it will be to play in a klezmer band.

Last Sunday we took a day trip to Waterford. We boarded a train at 9:30 for the three hour trip. We had another beautiful sunny day (after many rainy ones) and the scenery along the way is 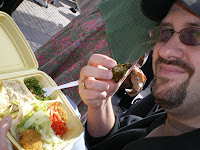 lovely. We were going to check out a Farmers’ Market which was part of a slow food festival. The market wasn’t much different than the one in Howth, but many local vendors were present, and it was the perfect day to wander around and eat lunch boxes from the Lebenese stand. We had our backpack cooler, so we bought a bunch of meat and sausages along with some other goodies.

Waterford was playing Kilkenny in a hurling match in Dublin, and the blue and white colours were out all over town. Waterford flags were flying, and many stores had “We support Waterford” signs. There was a huge screen broadcasting the match, in Irish, in the square where the market was held. 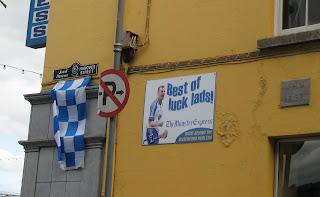 After the market, we visited the Museum of Treasures which presents Waterford’s history, starting with its Viking beginnings. The museum has a great selection of Viking artifacts, along with some cool, historical parchments. After filling our brain, it was time to grab a sandwich and

catch our train back to Dublin. 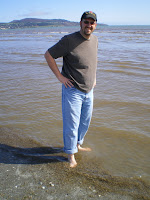 Today was yet another sunny weekend day. Many times the day dawns bright, but turns to rain later in the day. Bill says this has something to do with afternoon heating. I think it’s a plot against late sleepers. At any rate, we decided to take advantage of the sun and picnicked on the strand on Bull Island. We took the opportunity to dip our feet into the chilly Irish Sea. The clouds did come in a bit, but we had a lovely afternoon on the sand. 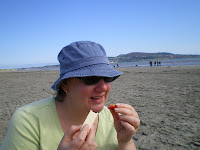 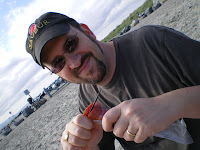 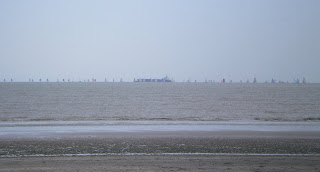