It’s starting to cloud up, but the skies were blue this morning. Temps were in the upper 30s with a very chilly wind as I walked to village centre around 11:30. After a visit to the post office, I ate a bowl of chicken and sweet corn soup at the River Cafe. I read The New Yorker as I ate, but also eavesdropped as best I could as a guy at the next table described how he can identify a good spiritual medium. After lunch I stopped by a clothes shop and returned some DVDs to the library. Have you seen The Ipcress File, Michael Caine’s first leading movie role from 1965? Bill and I quite enjoyed its earnest 60s cool. I checked out a book of Jonathan Franzen essays and dropped in at the pub for a cappuccino. 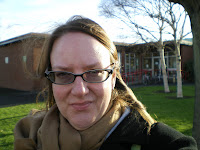 Here I am outside the Raheny library. This is the same branch Jimmy Rabbitte, Sr. visits in Roddy Doyle’s novel The Van. It’s the most frequently used branch in the Dublin Library system.