I was at the Honest2Goodness (H2G) Market in Glasnevin on a recent Saturday (if you haven’t been, you must go–it’s fantastic) and was delighted to see that J. Hick and Sons were selling game at their stall: rabbit and venison. I picked up a pack of venison goulash (marinated in Ed Hick’s secret blend of spices) and a jointed wild rabbit. I love both but I’m a sucker for rabbit. Farmed rabbit tastes like really flavorsome chicken, but wild rabbit is unmistakably rabbity. As it was browning for the rabbit ragu (recipe below) I caught whiffs of fur and straw coming from the pan. It smelled wild and wonderful. The ragu made enough for two meals, one with pasta and another with grilled polenta.

Ed’s venison goulash makes for a really easy meal. My friend Caryna (of Caryna’s Cakes fame) said she made a very tasty stew in a half-hour with just a pack of the goulash, a can of tomatoes and an onion. The recipe below is a bit more work but really good as well. It also made two meals, one with toasted sourdough from Arun Bakery and  buttered kale and another with some buttered, boiled new potatoes. By the way, Caryna and Arun Bakery both have stalls at the H2G Market–you can do your weekly shop there and help out amazing, local artisan producers.

Heat the oven to 150C/300F/gas mark 2. In a skillet fry the pancetta on medium heat until golden and fat has rendered, about 7 minutes . Remove to a medium hob- and oven-safe casserole leaving the fat in the pan. Add the venison to the skillet and cook until well-browned on all sides, about ten minutes. Remove to casserole. Reduce heat, add the onion, carrot and celery and cook until tender, about ten minutes. Add the wine, increase the heat and cook until the wine is almost evaporated. Add the broth, tomatoes, thyme and bay and bring to a boil. Pour into the casserole. Cover the casserole and bake in the oven until the venison is tender, about two hours.

Meanwhile, make the beurre manie. Mix the flour and butter together in a bowl until a soft dough forms. Roll into small balls the size of marbles and place on a small parchment-covered rimmed sheet. Chill in the fridge. Remove the casserole and place on hob over medium heat. When the stew is simmering add two dough balls and stir until completely dissolved. Keep adding the beurre manie one ball at a time until the stew is glossy and the desired thickness (about six balls total).

Heat 60ml olive oil in a large dutch oven over medium heat. Season the rabbit with salt and pepper and roll in the flour. Shake off the excess flour and add to hot oil. Cook until golden brown on both sides, about five minutes per side. Remove to a paper towel-lined plate to drain. To the pot add the remaining oil, onion, carrot and celery. Lower the heat to medium-low and cook until caramelized, stirring occasionally, about 30 minutes. Meanwhile, heat the oven to 140C/300F/gas mark 2. Add the tomatoes, thyme and bay leaves and cook another 30 minutes. Add the chicken stock and rabbit, increase the heat and bring to a boil. Cover, place in oven and cook until the rabbit is very tender, about 2 hours. Serve over pasta or polenta and top with grated Parmigiano. The rabbit can be left on the bone or shred and return to the sauce. 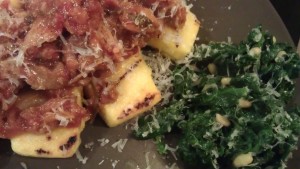 10 Responses to A Game Weekend