I’ll probably always associate wild garlic with St. Anne’s Park. The park is the first place I ever saw it, or saw it when I knew I was seeing it. I’m the kind of person who can notice a slight garlic aroma on a walk and not really wonder where it’s coming from. Bill, on the other hand, scented it like a herbivore beagle, picked some strappy leaves and proceeded to pesto it. We didn’t notice the garlic until a little late that year, so the following spring Bill watched for the little shoots and waited patiently until it was big enough to eat.

So it’s only fitting that wild garlic brought us to St. Anne’s Park a few weeks with a group from Slow Food Dublin. We were on an urban foraging expedition that would culminate in a lunch celebrating green things plucked from park lanes. We were being hosted by Tom O’Connell of O’Connells who had fed us breakfast and accompanied us on the bus ride to the park. He had already procured loads of wild garlic, but we picked up some nettles and some Alexanders to take back for our lunch. [Note that it is possibly illegal to forage in parks, so like, don't tell nobody.] 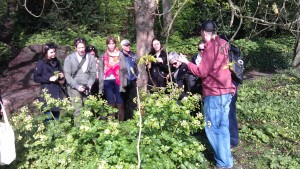 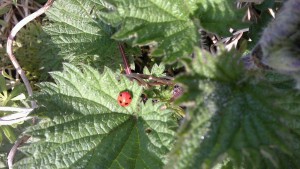 Ladybugs are called Ladybirds in Ireland. By any name, they are not afraid of nettles.

Upon return to O’Connells, Chef Udo Wittman demonstrated making several dishes with wild garlic–a potato and wild garlic soup and a beet, wild garlic & goats cheese salad. Chef Udo was great, giving us lots of information and laughs. Two things I found interesting: the tiny nettle leaves can be eaten raw with no treatment (yikes!) and that urban honey is more flavorful because of the variety of flowers. 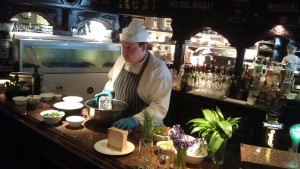 And then then the best part–lunch! 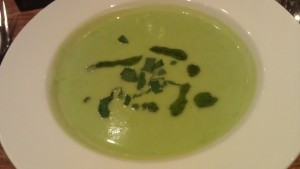 Chef Udo's garlic soup was scrumptious, drizzled with some wild garlic and parsley in oil 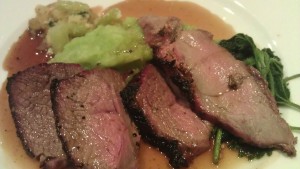 The lamb was terrific. O'Connells has a charcoal grill that provides a wonderful flavor to the grilled meats.

The sauteed nettles were a revelation--so tasty, and it takes just a minute of cooking to remove the sting. 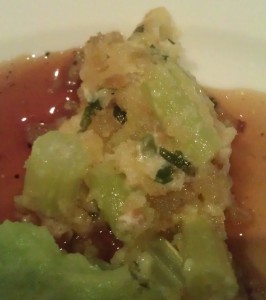 The Alexanders' celery-like flavor was delicious in the gratin.

A fantastic meal–and we had earned it by strolling through the park and looking so intently at plants!

Several folks shared some harrowing nettles stories from childhood, but I think every one agreed that nettles can indeed be food. And Bill and I learned about Dock leaves that always grow near nettles and are supposed to neutralize the sting. Tom and Chef Udo were such great hosts, our companions were lovely and the sun shown on us. A fantastic outing.

As it turns out, Bill, Dad and I were back in St. Anne’s today picking wild garlic and nettles for our Easter dinner. Bill used the garlic to stuff the lamb, and he’ll hopefully recreate the magic of the sauteed nettles. 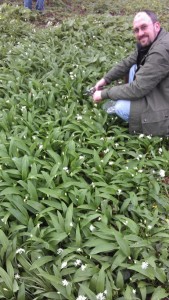