A Sunday in London A Few More Scenes from London

By Bill On February 6, 2010 · Add Comment
Tom Aikens in 1996 became the youngest British chef to be awarded two Michelin stars. He was 26. In 2003 he opened the eponymous Tom Aikens in London’s Chelsea. The restaurant won a Michelin star in 2004 and was named the 8th best restaurant in the world in 2005 in Restaurant’s Top 50.  He opened his second restaurant, Tom’s Kitchen,  also in Chelsea, in 2006. On Jan 3, 2010, we dined in Tom’s Kitchen.
Tom’s Kitchen is a brasserie that serves breakfast, lunch and dinner. The atmosphere is very casual: rustic wooden tables that can be moved together for large parties (and are quite close together anyway), an open kitchen, reasonable prices. Many of the starters and all of the pasta dishes can be ordered as a starter or a main. We ordered a bottle of the 2005 Rioja Crianza from Bodegas LAN to have with our meal and it was very tasty. We wanted to order the Eternum Viti Tempranillo (we’re suckers for tempranillo), but the two ladies at the table next to us ordered it first. When I say next to us, I mean about a foot from us. We didn’t want to seem like we were copying them. Childish, huh? But, gaw, we were seated like ten minutes before they were! 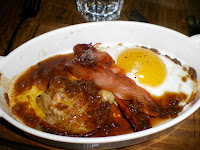 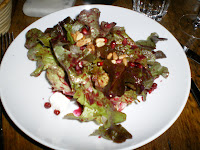 Sharon started with the Pan Fried Foie Gras served with duck egg and Ventreche bacon while I, beet-lover that I am, had the Beetroot Salad with Feta cheese, pine nuts, pomegranate and oak leaves. Sharon’s foie gras was the richest “fry up” imaginable while my salad was its complete opposite. Beets can be hit-or-miss in restaurants–they must have enough sweetness to balance the funky earthiness–but these were very good, and well-matched with the feta and pomegranate. It’s hard to tell from the picture but Sharon’s duck egg was enormous. 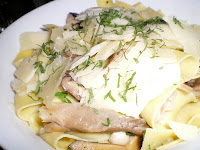 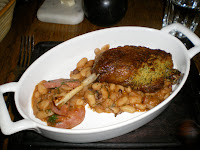 Sharon took advantage of the variable-portion pastas and had the Paparadelle with mixed mushrooms, truffle oil and fresh parsley as her main. The aroma emanating from her bowl was intoxicating. There is nothing in the world like the smell of a truffle. I had the Confit Duck Leg with bean casserole, garlic and Lyonnaise sausage. At first I thought the portion was a bit measly, but after taking my first bite realized it was just right. I was glad I started with the salad because this dish was very, very rich. The duck was topped with buttery herbed breadcrumbs and fell off the bone easily as a good confit should. With the creamy beans and sausage it was like a simple cassoulet. Delicious. 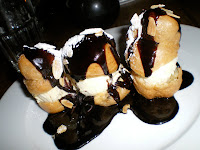 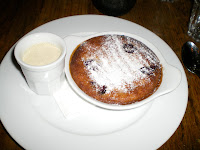 For dessert Sharon had the Vanilla Crème Brûlée Profiteroles with vanilla ice cream and warm chocolate sauce while I opted for the Baked Blackberry, Almond and Kirsch Clafoutis with crème anglaise. We had to wait a bit for my clafoutis which was fine. Profiteroles are a common dessert on Irish menus, so Sharon wanted to sample an excellent version–the pastry was tender and the sauce as rich and chocolatey as it looks. My clafoutis was light, creamy and almondy, and who doesn’t like a little crème anglaise on their clafoutis?

The total including wine and coffee was a steal at £110. Now, more about that table next to us. We got to know them pretty well with some eavesdropping (a foot away, remember?). One of them went on and on about her exercise regime which included yoga and pole-dancing class. Yes, that kind of pole-dancing. Apparently she can hold herself upside down on the pole which requires very strong abs. We were quite happy not knowing that.