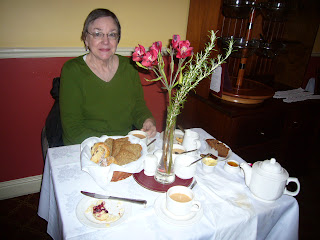 Here is a travelogue by Mom about their trip to Cork:

Charles and I took the train from Dublin to Cork on Thursday, Oct 29th. It was a rainy day in Cork. When we checked in to our B&B, Garnish House, we were served a lovely tea with fresh baked scones, fruit cake, chocolate cake and brown bread, butter and jam — delightful on a rainy 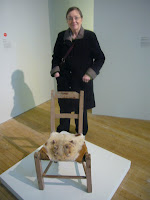 afternoon. After tea we walked over to Cork University and went to the Glucksman Gallery which had an exhibit of modern works by Irish artists (see the chair with the cow’s udder seat). Later we walked to the city center and strolled around in the English Market (“There’s nothing 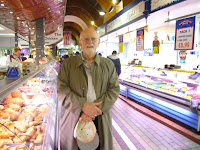 English about it, apart from the fact that it’s covered with a roof which was a radical innovation from across the sea when it was built in the eighteenth century.” Pete McCarthy).

The next day we got on a city tour bus and got off at the Irish Butter Museum (Cork led the world in butter exports back then). It was interesting but we thought the 3 euro 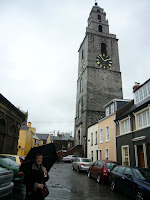 entry fee a bit high. The rain finally stopped and we walked to a nice café for dinner. 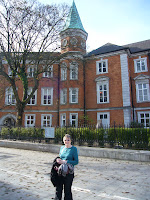 Saturday we walked to the quay area of Cork City. We found the Crawford Art Museum and enjoyed the beautiful paintings of Irish life. There were several paintings there by a man named Charles Lamb and we were particularly interested in them. 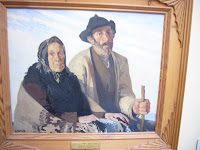 After a late lunch in the Crawford Café, we walked around the quay area. Lots of people were out on the Saturday afternoon and many of them were in costume. Halloween is celebrated in a huge way in Ireland. We left Cork on the late train and got back to Dublin after midnight and 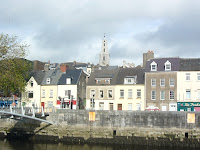 everything was closed down in Hueston Station. Thankfully a taxi came by and we flagged it down and got safely back to Bill and Sharon’s apartment. We did lots of walking in Cork and were glad we were somewhat “in shape” from the time spent at the gym in El Dorado.