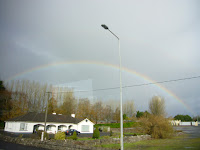 Here is a travelogue by Mom about their trip to Sligo.

Charles and I traveled by train again. This time we went to Sligo. Actually we had to get off the train after a couple of hours and get 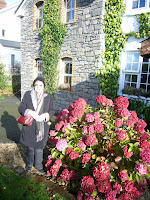 on a bus for the rest of the way into Sligo. That gave us a view of the area we couldn’t have seen from the train. The countryside is beautiful with rolling hills and lakes. Sligo is a small, old city in the northwest part of Ireland. It was raining there also. But rain doesn’t stop us. We checked into Pearse B&B about noon and walked into the city 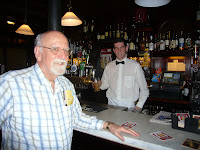 center. We found a nice shop called The Cat and the Moon which sells Irish made goods.

That night we went to Hargadons Pub and enjoyed live music. Hargadons interior is unchanged since 1864. Since Sligo is known as W. B. Yeats country, we were interested in the Sligo city library exhibit on Yeats. His Nobel Prize for literature is housed there. 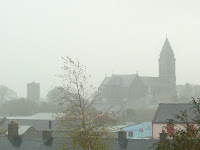 Later we found the Yeats Memorial Building which is the headquarters of the Yeats Society and has a permanent exhibition of pictures from his life. We watched several videos explaining his politics, writings and personal life. We were there a 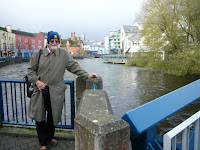 couple of hours. It was a great place to get in out of the rain. The Garavogue River runs through Sligo. It is turbulent and beautiful. The swans which live on the river were not in sight while we were there. The train agent told us that they were hiding in the reeds while it was so rainy. We enjoyed our three days in Sligo and would love to go back in summer when there are coach tours of the surrounding area. 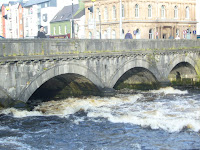 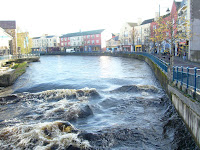