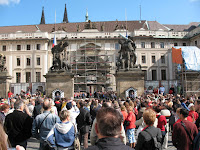 Prague Castle is the largest castle complex in the world and a much-beloved Czech national symbol. Founded in the 9th century and expanded several times since, it is still the official presidential residence. Our Lonely Planet-suggested itinerary placed it at the beginning of the tour, and since our hotel was so close anyway we spent the bulk of our first day there. We arrived during the noon Changing of the Guard, a ritual instigated by playwright and President Václav Havel in 1989. After the guards were changed we made our way past the throng, purchased some tickets, and entered the castle complex. 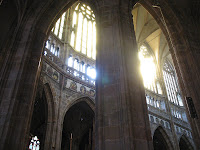 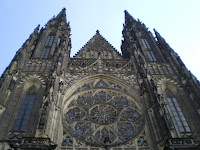 The dominating feature of the castle is St. Vitus Cathedral. I thought the Sagrada Familia in Barcelona was a long-term project, but St. Vitus was begun in 1344 and not finished until 1929. We postponed the cathedral because of the long line and went to the Story of Prague Castle museum first (very cool exhibit, but no pix because they weren’t allowed). When we came back to the cathedral and looked at our tickets we realized that they allowed us to enter through a different entrance and circumvent the line entirely. This was almost as cool as the line-circumvention feature of the online-purchased tickets for the Guinness Storehouse.

The interior of the cathedral is pretty awe-inspiring. The perimeter is divided into a number of chapels dedicated to various people and Saints. The stained-glass windows are gorgeous. We particularly liked the art nouveau Mucha painted glass window. 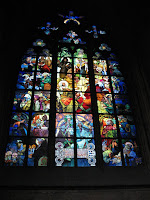 The strangest chapel, though, was the one dedicated to St. John of Nepomuk. One of his symbols is a tongue, and the sculpture in his chapel includes a cherub pointing to a blazing tongue. 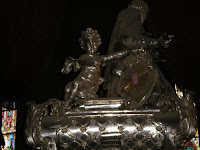 One of the miracles leading to his canonization is that after he died his tongue never decayed (he was martyred in part because he refused to betray the Seal of the Confessional). Later research has proved that the tissue in question is not actually his tongue but his brain. Not quite as miraculous but interesting nonetheless. The Wenceslas chapel houses the crown jewels of the Czech Republic. They are sealed behind a door with seven locks and each key is held by a different official of the government. They are brought out only rarely for special state occasions. 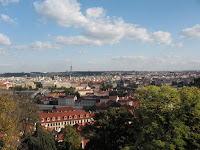 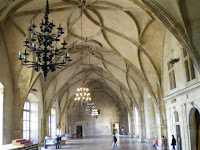 After touring the cathedral we went to the old Royal Palace. This picture is of Vladislav Hall, designed by Benedikt Ried in the late 15th century, where all the presidents of the republic have been sworn in. The balcony affords a lovely view of Prague. We finished our tour of the castle with a walk down the Golden Lane, which wasn’t memorable enough to photograph. Our Lonely Planet guide reserves half a day for the entire castle. We spent half a day there and saw only half the castle. Lonely Planet authors are a bit more ambitious and energetic than we are.