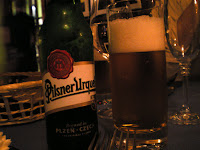 Bill and I were looking forward to visiting Prague, a land awash in dumplings and goulash. And happily, we had two excellent Czech meals. The first was our delightful riverside lunch where we had suckling pig with a leek dumpling and red currant sauce. I had some mint tea and we had our first taste of Pilsner Urquell, a highly 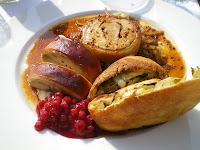 Sunday evening we had a splendid dinner in a cozy restaurant called U Modré Kachnicky (At the Blue Duckling). We started with some Czech Michlovský sparkling wine. I was overtaken by a spirit of “When in Bohemia…” and chose two items I’ve never eaten before: Beef Tongue and Pheasant. The tongue was tasty, served with horseradish sauce and pickled onions. I’m a sucker for horseradish, and now know it goes great with thinly sliced cow-part-you’d-rather-not-think-about. The pheasant was wonderful, very mild but not flavorless. 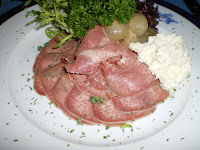 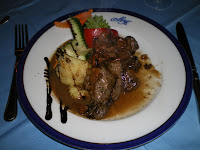 Bill started with duck rillettes and chose roast wild boar for his entree. Bill is a sucker for wild boar. Really, he is. Bill had a baked apple for dessert, and I had lemon sorbet, and although that’s not what I ordered, it was a perfect end to the meal. 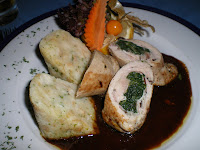 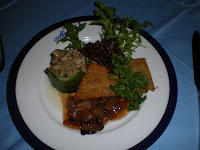 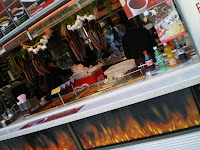 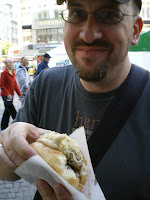 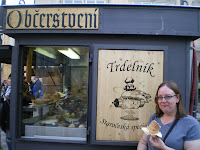 Although the late night takeaway is hard to find, food carts are plentiful during the day. We particularly enjoyed the sausage wagon (with real kraut!– a scarcity in Dublin), and the rolled cinnamon sugar bread.