When the Sun Shines But Is Not Hot Dining in Prague 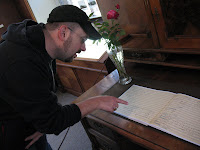 Sunday morning in Prague we ventured to Nové město (New Town) to visit the Antonin Dvorák Museum. The museum is housed in an 18th century home, and chronicles Dvorák’s life and development as a musician and composer. Bill really enjoyed seeing the scores of some of his favorite pieces written in Dvorák’s own hand.

After the museum, we wandered to Wenceslas Square. The square 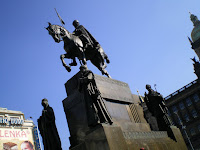 features a statue of its namesake, the patron saint of Bohemia. Wenceslas was Duke of Bohemia from 921 until he was murdered by his brother in 935. Canonized due to his martyr’s death, Wenceslas is considered the eternal ruler of Bohemia. Legend says that when the Motherland faces great 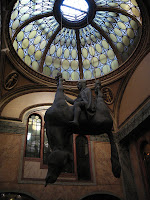 threat, the statue in Wenceslas Square will come to life and–by raising a sleeping army and finding a legendary sword–will slay all enemies of the Czechs. Let’s hope the correct statue is awakened, as there are two statues of Wenceslas within a few blocks, one being an installation by Černý (the 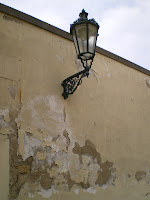 creator of the gentlemen of The Piss) that features Wenceslas upon a dead horse, hanging by the hooves.

Monday we explored the narrow streets of Nový Svět and walked on the grounds of Prague Castle, and then took the tram to the funicular for a ride up Petrin Hill. We exited at the top of the funicular track and walked through the woods. We saw the Hunger Wall, a fortification built in 1360 under the reign of Czech King Charles IV that provided wages to workers during a time of famine. We stopped for coffee 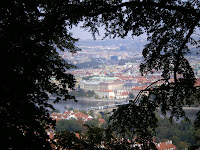 at a scenic cafe halfway up Petrin Hill. After a late lunch, a bit more shopping (chocolates!), and another walk on the Charles Bridge, we headed fo 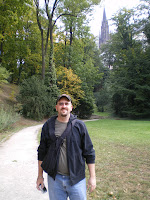 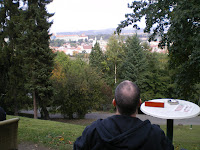