When the Sun Shines But Is Not Hot 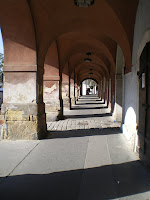 When we learned the meaning of the Czech word for September, září, we knew we had chosen the perfect time to visit Prague. We had four days of gorgeous weather and indeed the sun shone, but wasn’t hot. Although it did feel quite warm and we both got a little pink. (We’ve decided the sun just bleaches you in Ireland.)

Our flight out of Dublin on Thursday (25 Sept) was delayed by three hours because of traffic control problems in the UK, so we arrived in Prague around midnight. As we left the highway and drove through the dark streets our taxi began to shake a bit. Cobblestones, Bill said. Our mustachioed innkeeper was waiting for us, the only lighted window within several streets. Our room was lovely, simply furnished and bright. The wireless access was free. Continental breakfast was served in the adjoining hotel restaurant. The first morning I pointed to a diet coke in a refrigerated case. “Oh, not for breakfast,” the server said, meaning the sodas were not included with breakfast. I held up my fingers and rubbed them together, “I can pay?” I said. I felt a bit ridiculous, but I got my diet coke.

Our hotel was in Loretta Square, a 10 minute walk to Prague Castle. We spent Friday afternoon touring the castle. (More on the castle later.) We ate an early dinner in the hotel restaurant ( 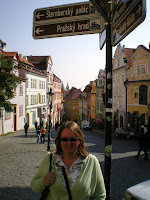 schnitzel for me, goulash for Bill) and rested in the room for a bit. Around 8:00 we walked back down to the Castle and enjoyed the evening views. We stopped back by for a snack at an Asian restaurant called Malý Buddha.

Saturday dawned bright and we headed down the hill into Malá Strana, one of Prague’s oldest boroughs. The steep street is lined with shops and restaurants, even a Mystic Pizzerie. At the base of the hill we were intrigued by a “Tower Open” sign on the corner of the Baroque marketplace, Malostranské náměstí. The Tower of St. Nicholas was built by Jesuits in the 18th century. We climbed 215 stairs of diminishing size, 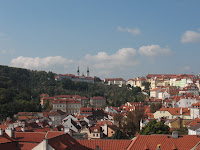 taking a short rest in the former apartment rooms of the fire watchman, passing the bell, to a balcony circling the tower. The view is gorgeous, surveying the red tile roofs (not just for haciendas!), the Vltava River, and Petrin Hill. 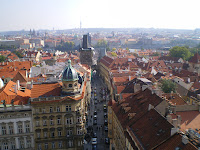 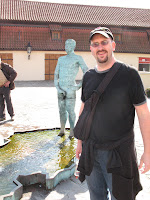 After the tower we wandered through the cobblestone streets, and saw a well known statue installed in 2004, The Piss–two animatronic guys peeing into a pool shaped like the Czech Republic. Whimsical or Political? You decide. 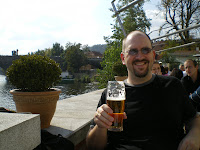 We lunched by the river, enjoying suckling pig with a leek dumpling and red currant sauce. After lunch we crossed the early 15th century Charles Bridge into Old Town Square in Staré Město. We saw the Astronomical Clock and the Church of Our Lady Before Tyn. We wanted to visit The Old Jewish Cemetery, but it was closed, Saturday being the Sabbath. This area is also Kafka territory with several of his residences dotting the map. 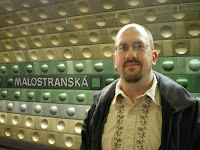 Saturday evening we attended a concert at Prague’s Art Nouveau Municipal Hall. Classical concerts are heavily promoted to tourists in Prague (which is not a bad thing to peddle). We were quite amused at the flyer for the concert we attended proclaiming “50 musicians on the stage!” Indeed, the North Czech Philharmony Teplice contains at least 50 musicians. The program included Dvořák, Beethoven and Glazunov. The performance ended around 10:30; we looked around for a place to eat, but were concerned about making the last train at midnight. So, we thought a takeaway would be perfect, however none could be found. Note to Prague: Few less statues, few more 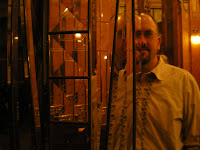 takeaways. We headed back to our hotel, but found all cafes and stores locked up tight, so our large, late lunch served us well, and a granola bar snack staved off starvation.

We were already loving Prague and still had two days left.