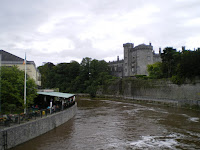 After a few weeks spent close to home, last weekend Bill and I ventured to Kilkenny. We’ve been to Kilkenny before, but didn’t get to explore the area as much as we’d liked because our car broke down. The Mighty Polo is in better form these days (more or less) so we decided to give it another go. We booked a “Relaxing Weekend” package at a hotel across the river from Kilkenny Castle. A deluge of rain was forecast, but our relaxation package included several meals, 30-minute massages, and 4:00 PM check out on Sunday–we didn’t have to leave the hotel if we didn’t want to. And if we did venture out, Kilkenny’s annual arts festival would be worth checking out.

Bill picked me up at my office Friday evening, and we arrived in Kilkenny around 8:30. We had dinner in the hotel at 9:00. As foodies there’s some pressure to choose the exotic, but 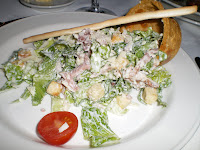 sometimes you want basic grub, and the hotel restaurant delivered that quite tastily. The highlight was my whimsically served, tumbled basket of Caesar salad. We both had steaks for entrees. The hotel was host to a world music segment of the arts festival, so at certain points during the meal, strains of an Indian tune or Irish trad mixed with the easy listening melodies in the restaurant, creating a soundtrack “like the mind of a crazy person,” as Bill aptly observed. At least the crazy person ate normal food.

Saturday morning we were happy to eat breakfast in the hotel while rain lashed outside and young and old donned slickers in the lobby before venturing out for soggy seeing. We booked 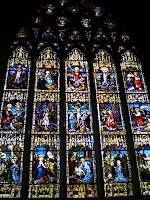 our massages for 12:00 and 12:30, and spent the morning watching Olympics. By 1:00 the rain had cleared, and we ate lunch at a nearby cafe. We wandering through some of the art exhibits, bought tickets for an orchestra concert that night, and visited the Black Abbey. The Black Abbey was built in the 13th C, destroyed by Cromwell in the 18th and rebuilt in the 19th. The church is still actively used by the Dominican order and has an impressive stained glass window from 1892 and a beautiful 15th C alabaster carving of the Holy Trinity. I have to say, it’s hard to visit many historical sites in Ireland without acquiring a distaste for Oliver Cromwell. Bill and I have developed a Seinfeldian Newman! 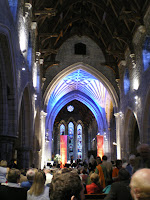 response to his very name.

We’d seen the Ulster Orchestra perform before, but not in a 13th century cathedral. St. Canice’s cathedral is a lovely venue, even if the acoustics were not great for the featured violin. The rain had returned by the end of the concert, and we took refuge in an Indian restaurant down the street where we had a great dinner.

Kilkenny has a dual life as tourist-friendly, medieval city by day, and noisy, stag and hen party haven by night. The nightclubs were coming alive as we walked back to the hotel around 11:30, but the partying had been going on long enough that guys were already puking in the streets. Nice.

Sunday morning was cloudy, but not as rainy. After breakfast we walked the grounds of Kilken 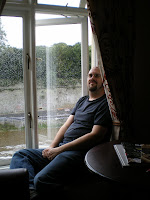 ny Castle for about an hour. We were highly entertained by a Little Grebe diving in a pond to find food for its chick. The air was autumnal, which of course freaked us out, as it was mid-August.

We had lunch at the hotel, and lounged in our room to wait out another band of rain. We left around 3:00, stopping by the shop at Jerpoint Glass. Luckily we were able to bypass the guard dog, and bought some 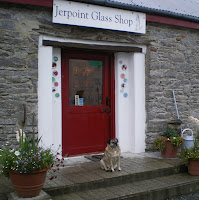 candlesticks from the Seconds room. We proceeded on to Jerpoint Abbey. The lingering rain didn’t discourage our exploration of the Abbey, and it was the highlight of our weekend. The Abbey is so cool, that it deserves its own post.