Back to K-Town Things You Won’t See in Ireland 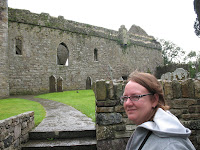 As mentioned before, Bill and I visited Jerpoint Abbey a few Sundays ago, after our Relaxation Weekend in Kilkenny. Jerpoint is one of best preserved abbeys in Ireland, having been maintained by the Kilkenny Archaeological Society since the mid 19th century and under protection as a national monument since 1880.

This Cisterian Abbey was initially constructed in 1180 with a cruciform church layout with nave, chancel and transepts. The remaining 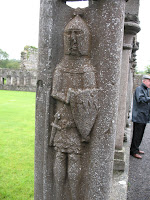 structures dating from the 13-15th Centuries include the Nave, North Aisle, Cloister Garth (courtyard) and Calefactory, the only heated room at the Abbey. The Cisterians were an austere offshoot of the Benedictines. They lived on veggies and beer, and could visit the Calefactory only a few times throughout the day for a total of an hour. 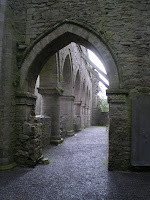 The outstanding feature of Jerpoint Abbey is the carvings throughout, many the work of a famous stone sculptor family from the 15 and 16th Century, the O’Tunneys. Jerpoint Abbey was surrendered to the Earl of Ormond in 1540 as part of Henry VIII’s Dissolution of the Monasteries. The total holdings of the Abbey at that time included a castle, several watermills and fisheries, comprising around 14, 500 acres. 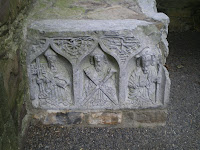 Three of the Apostles: Peter with the key, Andrew with the cross, and possibly Luke (we can’t remember, and Luke and Mark share the symbol of the book). 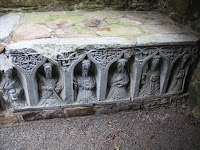 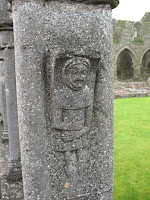 The sin of gluttony. 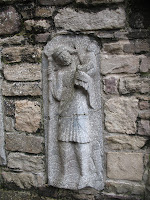 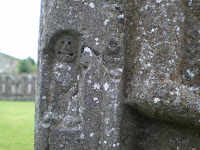 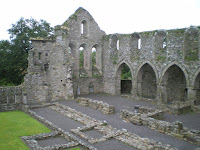 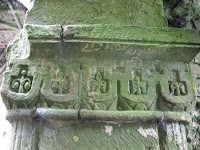 Even though it kept trying to rain on us, we found Jerpoint Abbey fascinating and beautiful. 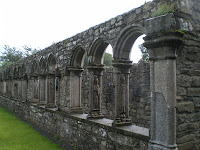