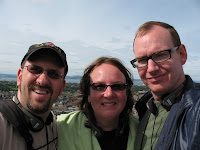 Back in the recesses of time, three travelers set out for a wild and woolly land. The date was July 12, 2008, and the trio braved a low fare air trip, landing square in the middle of mystery and history, the capital city of Scotland since 1437. This is what they found there: 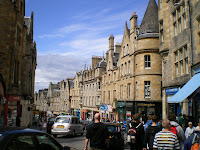 he city a more medieval feel than the Georgian squares of Dublin. Although I’m not really sure what medieval feels like, and am quite happy to not know what medieval smells like. Somehow the Scots transformed crags and bleak and windswept into a beautiful city that continues to encompass the idea of a New and Old Town, as the main sections of town are called. Edinburgh’s duality is a possible inspiration for Dr. Jekyll and Mr Hyde. (Let’s all promise to pronounce Jekyll correctly, Jee`-kle.) And the city continues to evolve. With a Gothic core and neo-classical New Town (constructed between 1765 and 1850), Edinburgh also felt a bit more modern than Dublin as well.

We arrived in Edinburgh Saturday afternoon, checked into our apartment and then headed for the Royal Mile. We stopped into a couple pubs, our favorite being The Jolly Judge. This cozy 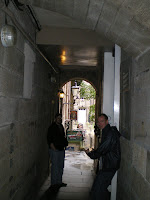 pub has a low ceiling with painted beams taken from a ship. At the Jolly Judge we tasted our first Scottish ale. Cask ales are popular in Scotland. Cask ale or cask-conditioned beer is unfiltered and unpasteurized beer conditioned (including secondary fermentation) and served from a cask, usually without additional nitrogen or carbon dioxide pressure. After delivery to the pub, the beer continues to develop and mature due to the presence of live yeast in the cask. Typically it’s dispensed via a hand pump. Bill enjoyed three different cask beers, two from Caledonian and one he can’t remember. Of the two from Caledonian, the Caledonian 80/- and Deuchars IPA, the Deuchars was his favorite. He didn’t think he would like an Indian Pale Ale as they are often quite bitter, but the Deuchars was very tasty and refreshing and eminently quaffable. Its relatively low alcohol content makes it a perfect session beer (meaning you can drink a lot of it and still play your fiddle). We also visited another pub to listen to a bit of trad.

We had read that it was best to visit Edinburgh Castle in the morning, but we decided to snooze a bit on Sunday and had some brunch before arriving at the Castle around 1:00. Armed with our audio tours, we spent all afternoon at the Castle. We learned tons of history, saw amazing views and the oldest building in Edinburgh, St. Margaret’s chapel, built in the 12th century.

We had lovely weather for our day at the castle. Note the pictures below for comparison to my parents’ visit last November. 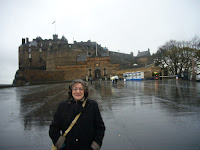 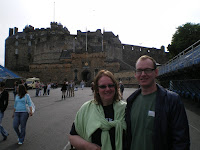 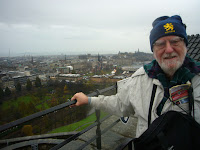 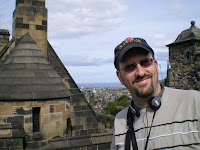 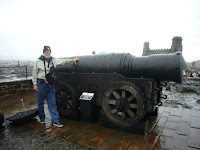 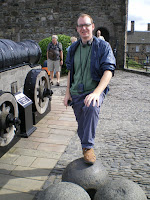 Sunday night we went on an entertaining and educational literary pub tour. We heard stories about Walter Scott, Robert Louis Stephenson, Robert Burns and others while visiting the setting for all that literary history. It was a fun two hours, and we wound up at a lovely pub called the Cafe Royal. 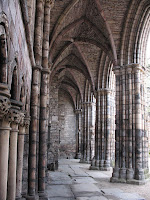 We got a slightly earlier start on Monday and visited the Palace of Holyroodhouse. Holyrood was Mary, Queen of Scots, home until she was imprisoned by her cousin Elizabeth I. It’s still the official residence of the Queen of England when she visits Scotland. 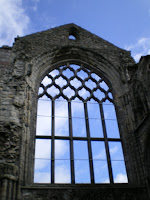 Adjacent to Holyrood house are excellent ruins of an Abbey built by King David 1 of Scotland in 1128.

While walking around the grounds we noticed some tiny figures atop the peaks in Holyrood Park, so we decided to do some hill walking. After eating lunch in the Palace Cafe–Chris had a baked potato topped with Haggis!–we set out for the hills. The seat is 823 feet high, and while most of the path is grassy hills, it gets rockier as you approach the seat. Chris scrambled easily up the path–he has a natural hill walking physique. Bill stayed with me as I took frequent breaks to enjoy the scenery. I decided the scenery was so nice on one plateau that I stayed and sent Bill ahead. After a bit of rest I noticed people ascending the last bit via a somewhat easier route than the mountain goat trail Chris and Bill used. I’m glad I got the final burst of motivation to climb to the top, as the view was spectacular (and windy). 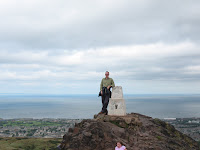 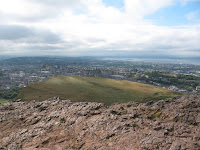 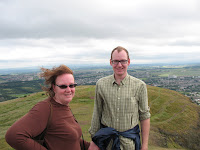 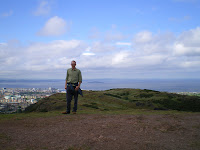 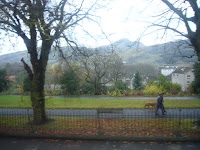 Arthur’s seat is the high point in this picture, taken last fall during my parents’ visit. We descended to the East, crossed a small field, and made our way down a long set of stairs to the village of Duddingston to find rest and refreshment in a pub called the Sheep Heid–the oldest public house in Edinburgh. The name came from an ornamental snuff box presented to the Inn by James VI in 1580. By that time the Inn was already over 200 years old.

We ate the splendid meal of adventurers that night, after surviving our rocky climb. And that is why Chris was so happy with his fish and chips. 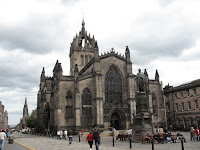 cathedral is the “Mother of the Church of Presbyterianism,” and houses the Chapel of the Order of the Thistle (Scotland’s chivalric company of knights). We liked the angel playing bag pipes in chapel. After lunch we did our last wandering, and then headed for the 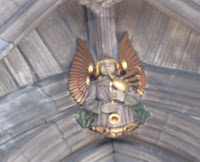 By the way, the apartment was the perfect accommodation for the three of us. It was great to have a fridge for soda and yogurt and an oven to heat sausage rolls! Perhaps my favorite part was the huge sofa on which to lounge and watch TV. After nine months with only a love seat, I was sprawled in luxury. 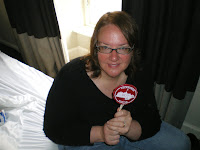