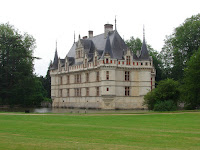 Our second destination on Monday was Azay-le-Rideau. It was the first château we actually went inside, as the gardens of Villandry completely overshadow its château. It was also the first château we had trouble finding. We drove into Azay-le-Rideau following the usually very helpful brown tourisme signs. Driving down the main street we saw a sign pointing ahead saying “100m.” The next sign we saw pointed behind us and said “200m.” How do you miss a château? So, we turned around in a round-about and drove back, turning onto the only street between the signs. It led to a parking lot, so we figured we were close to something and parked. We gathered our stuff and walked back to the main street. A pedestrian path next to the parking lot led to the visitor center for the château, so we had figured right.

Construction on the château of Azay-le-Rideau began sometime before 1515. Gilles Berthelot acquired the lordship of Azay through his wife and started constructing a residence according to his own tastes, but it was his wife, Philippe Lesbahy, who directed most of the work. Berthelot would not see the end result of their work, however. Accused of colluding with his friend Semblançay, the Financial Secretary, in embezzlement he was forced to flee the country in 1528. The property was confiscated by King François I and given as a reward to one of his high-ranking soldiers. The property changed hands several times over the following centuries, eventually being acquired by the State in 1905. 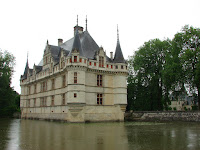 The château is constructed on an island in the Indre River, making it appear to rise out of the water. Unfortunately we don’t have any pictures of the interior. We weren’t allowed to take any flash photography and it was overcast outside, so there wasn’t enough light. Otherwise you could see the grand central staircase designed by Mme Lesbahy which is its greatest innovation. 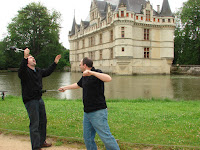 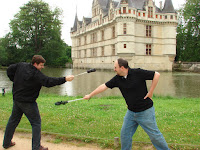 We did, however, capture a duel in progress. The umbrellamen certainly chose a picturesque location to settle their differences.