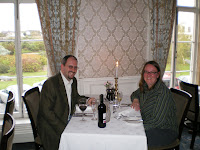 Our eight-course dinner at the Ghan House was pretty extravagant. I made the reservation that week and I think we were the final one as the dining room was full. The Ghan House hosts these dinners eight times a year.

We started with canapes: smoked eel, cannellini bean puree on crostini and Clonakilty black pudding “bon-bons.” My favorite was the black pudding. The remaining courses came with a choice from vegetarian and omnivorous options and we differed 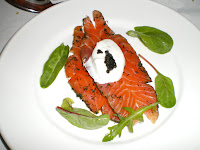 on only one course. 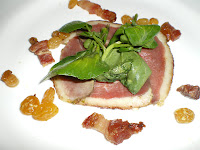 Third: Carpaccio of Barbary duck with lardons, sherry-soaked raisins and watercress salad. Perhaps our favorite course. The sweetness of the raisins and the smokiness of the lardons complemented the duck perfectly. 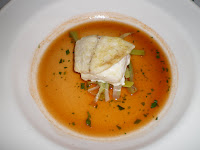 Fourth: The course on which we differed. I had the baked turbot with leeks in a shellfish bisque. Here we have a peeve of mine. A bisque is a very rich and creamy soup made from pureed crustaceans. The primary ingredient is not tomato, or corn, or any other vegetation, and neither is it clear. My turbot was not served with a bisque, as you can see, but a broth. A delicious broth that I took a spoon to, but a broth nonetheless. The turbot was nice, too. 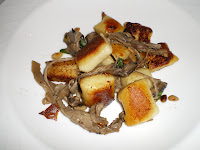 Sharon had the homemade gnocchi with wild mushrooms, white wine and basil, and toasted pine nuts. The gnocchi were pretty heavy, but had to be I suppose in order to brown them. It was an interesting variation on gnocchi in brown butter that Sharon liked.

Fifth: Champagne sorbet. Sorry, no picture, but it was very refreshing and tasty. 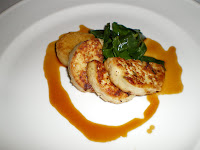 Sixth: Truffled boudin of black-legged free-range chicken with fondant potato, spinach and chicken jus. This was a strange choice for a main entree. Normally a meal like this will build up to a tremendously rich red meat course like braised short ribs or a steak. Instead we have… chicken. It was good, and props to the chef for serving 40 people all at the same time a piping hot dish. I wouldn’t call this a main entree, though. 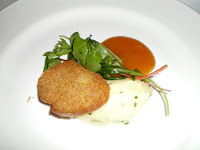 Seventh: By this time we were exhausted. Our dinner started an hour late because the chef wanted to wait until everyone had arrived. Understandable, but I wanted to pop everyone at the table that held us all up. Here we have ballybrie mousse with apricot puree, crostini and salad garnish. We almost missed this one and I had to flag down our waiter to tell him we had ben forgotten. Ostensibly a cheese course, the mousse was overpowered by chives. I’d have rather had a normal cheese course. Or a nap. 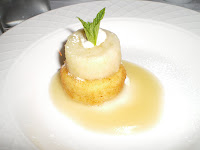 Eighth: Poached apple with apple puree and fried pastry cream, and thankfully a very light and soothing dessert. How the heck do you fry pastry cream, though?

After tea and what the menu called homemade petit fours but were actually chocolate truffles we crawled back to our room and collapsed. The dinner lasted four hours, but an hour of that was due to the tardiness of the Larry McLateington party.

Everything was tasty (excepting the ill-conceived cheese course) and we enjoyed our dinner a great deal. I was expecting something more spring-like, though. This was a very autumnal menu with truffles, apples, duck, and even a pumpkin risotto which was the vegetarian option for the sixth course. Where was the asparagus, baby artichokes and spring lamb (for which the Cooley peninsula is famous)? I didn’t speak with the chef, so I guess we’ll never know.