Blessed are the Cheese Makers

We were very happy when Sheridans Cheesemongers starting bringing a stall to our local market in St. Anne’s. We chatted to the monger frequently enough to learn his name, and then one day a new guy starting coming whom I call Tim, but is possibly named Tom, or even Sebastian. “Tim” is always handy with the samples and suggestions. One day he gave me a taste and asked what I thought. The cheese was little crumbly and bold flavored, but in the moment my mind emptied of all cheese varietals save one. “Is it cheddar?” I said, and as I spoke those words I felt any food cred fall away, and saw a small shadow darken Tim’s eyes. He was a gentlemonger of course, and kindly told me non-cheddar cheese’s name, but I can’t remember exactly what happened after that. I think I just bought some Haloumi and slinked away before I started declaring all the cheeses “Swiss” (which I probably did anyway. I can never say Emmental).

Before you go all Wisconsin on me, I know cheddar is a perfectly fine cheese with varying provenances and pedigrees, it’s just not the only cheese.

In October, Bill and I spent four Wednesday evenings nestled among fellow cheese lovers in Dax Cafe Bar, participating in a class presented by Elisabeth Ryan from Sheridans. Each week we learned about the different kinds of cheeses, and the factors that influence each cheese’s flavor. I had never realized that hard cheese is made in the summer when milk is more plentiful, and soft cheeses are from winter milk. Also, there is no such thing as one “room temperature” and you shouldn’t let your cheese sweat. And the “flavor crystals” Bill and I used to comment on are a real and desirable thing.

Most importantly, we ate cheese. We sampled some Big Hit cheeses from a variety of regions, including the luscious Epoisses from France, seductive Manchego from Spain, and bold Stilton from England, but we spent a lot of time talking about Irish Cheeses. If you haven’t already heard, Ireland is truly embracing its inner curds and whey.

One evening Kevin Sheridan led us through a tasting of Irish Cheeses that had recently won medals at the Irish Cheese Awards. Kevin explained that Ireland’s cattle are predominately grass fed which differentiates Irish milk from other European countries. Ireland’s unique milk creates spectacular cheeses, because, as Kevin said, Cheese is Grass. Ireland also produces lots of goat’s milk cheese and several sheep’s milk varieties as well. Sheep’s milk cheese are more rare because sheep are low milk producers, but the fat content in the milk creates very creamy cheese.  Helen Finnegan’s Knockdrinna Meadow that won Gold Medal in the Cheese awards is just that, a creamy bite of meadow. Bill and I are also fans of Crozier Blue, which won the Sheep Silver. We like that it’s richer than the cow’s milk varieties. [I'm a huge fan of blue cheese though, from crumbly to oozing, from blushing blue to blue in the face. And how cool is it that the bacteria for Cabrales come from the walls of the cheese cave rather than being injected. Another tip from cheese class!] 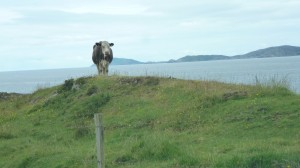 Ireland’s fantastic milk and perfect cheesemaking climate–”Ireland is one big cheese cave” Kevin said–allow Irish cheesemakers to borrow traditional cheesemaking methods, but make cheese that uniquely Ireland’s own. On our third evening of cheese class, David Tiernan of Glebe Brethan, spoke to us of his journey from dairy farmer to dairy farmer who makes award winning Gruyere-type cheese. Making cheese allows David to benefit more directly from the care he puts into producing his milk, and he enjoys seeing the end consumer. He says he loves the moment when a customer has picked up a bite and walked away, only to stop and turn around when the taste comes through. He does have to frequently explain that it is not cheddar. As a matter of fact, a slogan for Glebe Brethan could be, “It’s not effing cheddar.”

David has a farmer’s practicality and says to pay attention to the traditions that come before you. If cheeses makers in France say to mature the cheese on spruce planks cut when the moon is waxing, there is probably a pretty good reason to do that, because they’ve been doing it for centuries.

David shared that maturing cheese is the real skill in cheese making. David and Elisabeth told us of magical cheese tasters that can predict the exact time that a cheese will reach perfection. One element of our tastings was trying two maturity levels of a few cheeses, including Glebe Brethan, to contrast the flavors.

Our last evening of cheese class was about wine and cheese pairings, and the basic message was eat cheese and drink wine that you like. When putting together a cheese plate, it is unlikely one wine will work wonders with each cheese, so the goal is to choose a wine that can be a graceful accompaniment. But some wine and cheese combos create amazing new flavors, like a pairing we tried of Cratloe Hill Sheep cheese with Il Casolare Rosso.

If there is any doubt that we are in the Age of Irish Cheeses, check out the new book by Glynn Anderson and John McLaughlin, Farmhouse Cheeses of Ireland – A Celebration.  This beautiful book will tell you everything you need to know about Farmhouse cheese in Ireland. I met Glynn’s wife Lucy at the Savour Kilkenny Food Market, and she invited me to a book launch reception with Feargal Quinn, a senator and the founder of SuperQuinn.  At the reception I chatted with Eugene Carr, who had started working with cheese makers in the 1980s to provide marketing support and help build up a retail presence. He said he would take 15 cheeses to a meeting and folks would say, So, tell me about all these cheddars. (They weren’t all cheddar!)

Eugene told me that SuperQuinn’s  early interest in Irish Cheese was important to the developing industry. So, it was fitting that Feargal Quinn spoke, and “christened the baby,” as they said at the launch. In his talk, Feargal said this book would influence future food traditions of Ireland. A wonderful part of food culture in Ireland is that any food producer is no more than a half day’s drive away. Bill and I have met several producers like the lovely Anna Laveque of Triskel cheese, and when on the Beara Pennensula, we called out to the home of Milleen’s and chatted with Norman Steele. He told us the amazing story of how their cheese grew in popularity on the power of its flavor alone (and possibly the power of its aroma!). I loved the part where they started getting telegrams with orders, as they didn’t have a phone. As Norman pointed out, the postman had to ride his bike up a very large hill. I can’t imagine a more lovely place to live and make cheese.

The view down the Steele's drive

A great part about a book launch for a cheese book is the eating of the cheese at the reception. Even better we were given takeaway boxes to take home samples, so I took some Triskel pyramid, a lovely Loire-valley style goats cheese. Back at work that afternoon, I wanted to share the Triskel love, so I served up a good slather on some brown bread and offered it to a coworker. He took a bite, and was viscerally reminded that he doesn’t happen to like goats cheese. I saw him heading to the bin with the uneaten portion and I shrieked, Don’t throw it away! Don’t throw it away! So he returned the remaining bit to me, and I ate it, and it was glorious.

When I’m peckish a little bite of nice cheese usually sorts me out.

7 Responses to Blessed are the Cheese Makers