Four Years: Looking back Stories from the Dinglefest

Last weekend we were in County Kerry for the Dingle Food and Wine Festival. (So much about that sentence makes me happy.) On Sunday morning we were invited to join some fellow foodies on a fishing trip, so six of us found ourselves gathered in the marina on a foggy morning. We were uncertain. We were wearing layers. Can you fish in the fog, we wondered, such landlubbers were we. This is brilliant weather for fishing, our skipper assured us, sounding nothing like a pirate. (Bill and I had hoped he’d sound a little like a pirate.)

Heading out to sea

We boarded the Sarah Ellie and headed off across the glassy water. We could see the mouth of the bay in the mist, but in a few minutes we were lost in the fog. Our skipper, Paul, killed the engine and gave us a two minute lesson on sea fishing–Let her out, keep your thumb on the spool, then reel her back in a little. Out. In. Keeping her moving.

From the moment the first lure hit the water, our day turned magical. Within seconds Ollie had reeled in a 6kg pollock. It was a stunner of a fish. We were all amazed. Even Paul was amazed. The fish went into the blue fish bucket, and we all set ourselves to fishing, hoping to match Ollie’s catch. In. Out. Keep her moving. A few more pollock came on board. I caught one that weighed few kilograms. We caught lots of mackerel. They all went into the fish bucket, gasping a bit, but shining silver, the mackerel’s backs covered in green and black tiger stripes.

Paul moved the boat to a new location. We all hit twitter with our fish tales. Fishing is fun! Then we fished some more. We threw back tiny mackerel. We sang sea shanties. (Not really, but we should have.) We caught a load of fish.

Gathered around our bucket of fish, we snapped pics of our catch like they were celebrities. That’s deadly, Niall said. Irish slang for great. It was deadly, the deadliest catch! All thanks to our excellent skipper, and some mad, foodie fishing skills. Great job Bill, Ollie, Niall, Aoife, and Ross!

We both have fishing in our genes

Back at the marina Paul filleted the fish. Slice in behind the gill, down along the bone. On the mackerel, flip over and repeat, to create a butterfly. On the larger pollocks he cut separate fillets on each side. Ollie’s fish was almost too large for the knife. You can feed ten people off that fish, Paul said. He bagged the fish for us and send us over to the Marina Inn and told us to ask for Darcy. 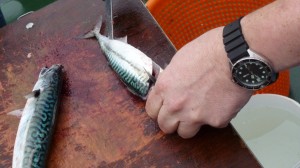 Darcy is the chef at Marina Inn and she prepared some of our fish for lunch. We washed the scales from our hands, and restored ourselves with post-voyage pints of Guinness and Crean’s lager (from Dingle Brewing Company). We shared a starter of tasty mussels in cream sauce. Darcy played a blinder* and served us three fish dishes–fried, beer-battered pollock; pollock with Parmesan cheese crumb; and mackerel with chorizo, potatoes and sun-dried tomatoes. Everything about the fish was great–the texture, the flavor. Eating fish that had been swimming in the ocean not more than 90 minutes before is incredible. I think the mackerel was a favorite–it has a bit more flavor that the pollock. A lunch to remember.

Many thanks to Aoife for organizing, and to Paul of Dingle Bay Charters and Darcy at the Marina Inn.