In the Summertime Welcome to the new site

I took a half day off work Thursday. This is what happened.

It’s 3:30 and I’m sitting in Stephen’s Green. I left work at 12:30 and had a long lunch with friends. A two-hour lunch to celebrate a birthday. A lunch that included wine and dessert. Afterwards my friends returned to work and I walked down some leafy streets I had never walked down, near my office. I took pictures of churches and bought a Diet Coke at a narrow SPAR. I got a cold one from the back of the case.

I walked up Camden Street and checked in Listons for some smoked duck Bill had told me about. They didn’t have the duck, so I didn’t buy anything even though Listons is full of lovely food. I like to buy lunch there. They frequently play music I would consider “Austiny.” (Austiny=Lucinda Williams.) At the Fresh market I cut across to Harcourt Street on my way to the green. I noticed a beleaguered woman in a sundress and impractical sandals pulling a suitcase. She noticed me and asked if she were going the right direction for the Harcourt Hotel. “Someone told me it was this way,” she said in her English accent. I didn’t know the Harcourt Hotel, “but you are on Harcourt Street,” I said. “That’s a good sign.” I made sure to say Harcourt Street because residents of the UK and Ireland get annoyed when Americans leave off Street and Road and Lane. I’ve walked along Harcourt several times and don’t remember the Harcourt Hotel, but there are plenty of buildings, at least 65% of which could conceivably house hotel lodgings.

The green is full of people walking and sitting and lounging upon the grass. I find a bench looking out on the central section with fountains and formal flower beds and pull out a Paris Review I had bought in Texas but have yet to read. This issue has a section of photographs of beaches. Beaches in Italy and Croatia and the U.S. I think of the beach Bill and I visited last month in Spain. We had been driving North from Portedeume to Cedeira. As we passed through Valdoviño, Bill said, “Quick, check the book, there’s something here.” I flipped through the Lonely Planet and exclaimed “Praia Da Frouxeira! A beach!” We whipped our heads to the left and spied a patch of brilliant blue rimmed with white foam and sand. “Holy Crap!” we cried and Bill turned the car around. 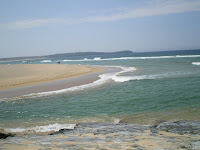 The sand was soft and not hot like the Gulf white sand. Gulf white sand is almost molten. We walked along the edge of the water which was yelping cold. A few people were in the water, mostly children. Water temperature is of little concern to a frolicking child. There were also a couple guys para-surfing–they were wearing wet suits. We walked toward the rocky part of the beach and climbed up on a dune. We plopped down and sat for a while, looking at the auqamarine water and listening to the waves.

I love the sound of the waves and looking out at the expanse of water. One photo in the Paris Review is a centerfold panorama of Coney Island. The beach and water are packed with people and beach umbrellas. It looks like candy sprinkles on a giant cupcake. I don’t like busy beaches. I like quiet ones where you can hear the waves. Like in Valdoviño and Anna Maria Island, Florida.

I like sitting in the green as well. This afternoon is full of sunny spells. I’m wearing a celery- 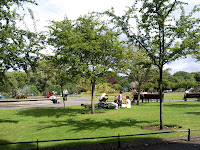 colored cardigan with three-quarter length sleeve, trimmed with a small ruffle. I’m also wearing a light scarf. I chuckle to myself about wearing a scarf on July 15–the height of summer. Between the sunny spells a chilly wind blows at my back and brings a few drops of rain. Sometimes the rain doesn’t wait for the sun to quit shining. The wind blows cold against my lower back because I’m wearing the ass crack jeans I accidentally bought in Texas. Well, I was intentional at the point of purchase, but I didn’t realize they would stretch easily and fall below my hips. Sometimes you can be in full possession of your faculties at the time of the transaction, but not be truly aware of what you are transacting.

I consider staying in the green all afternoon reading the Paris Review, but I had intended to do a bit of shopping, so after a while I’ll walk through the green toward the shops. Later Bill will meet me for dinner and as I’m telling him about my day he’ll look up the Harcourt Hotel on his phone. It is just a little ways up Harcourt Street, and I’ll be confident the woman in the sundress had found her accommodation.

2 Responses to Thursday at 3:30 in the Green