A Brief, Inaccurate History of Jambalaya

As I mentioned on the menu, while the terms Cajun and Creole have distinctions for some, most folks use them interchangeably. You can find jambalaya in Dublin, but we haven’t tried it. After an unfortunate Cajun chicken wrap incident, I’m wary. Like “Tex-mex,” we’ve found the term Cajun applied to any vaguely spicy dish. Ah well.

The concept of Mardi Gras partying is not well known in Dublin either. Shrove Tuesday is celebrated as Pancake Day. Not a bad thing at all. Although I think we were among the few having American-style pancakes on Pancake Day. Pancakes here usually means crepes. Again, not a bad thing. 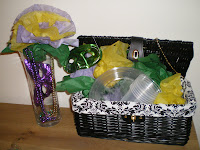 Since I knew I wouldn’t find Mardi Gras decorations in Dublin, I contacted Heather of Party Imports (really just my awesome friend Heather) and she shipped us a package of masks, beads and other purple, gold and green decorations. Thanks, Heather!

We had eleven people over for a tasty meal of Chicken and Sausage Jambalaya, Shrimp Creole, and Mini-Muffaletta. Bill made the boudin this year, and we made boudin balls rather than boudin rolls.

We couldn’t find wanton wrappers and spring roll wrappers just aren’t the same. The boudin balls were a hit, served with Zatarain’s Remoulade. The best remoulade! And of course, Bill made King Cake! 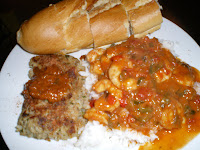 I forgot to take pictures before we ate everything; above is a shot that’s trying to pretend the King Cake is still whole, and a picture of our leftover boudin and shrimp creole the next day.

Thanks, Bill for making such a delicious meal for all of us! 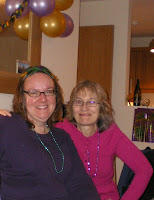 Note: Not all our attendees are pictured. Not a good night for my photography skills!