Follow-through in Ireland down, study shows Pictures at an Exhibition 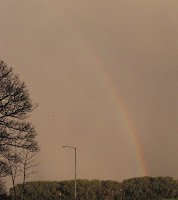 We’re experiencing the coldest winter in Dublin in 18 years, which compared to Minnesota is still not very cold. But for Dubliners and Austinites, it’s very wintry. [Some perspective: I grew up in Houston and thought water frozen in a ditch was amazing.] We’ve had a couple hard freezes reaching 27°F, and several days of wintry precip. Unfortunately, the periods of lovely snow have been followed by ugly sleet/hail/rain. My commute home Tuesday night was particularly unpleasant in cold slush. Bill had left work early in heavy snowfall, but it turned to rain by the time he reached Raheny. He did see a rainbow though.

Thursday saw some accumulation in Raheny, which has been sticking around in the shady spots. Yesterday was a beautiful, sunny Saturday, and we took a walk in St. Anne’s. 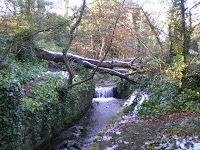 Today we woke up to another pretty snowfall. We snapped some photos off the balcony and on the way to church. Of course, it had turned to rain by the time we left church. 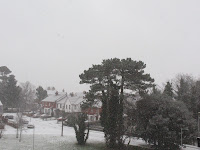 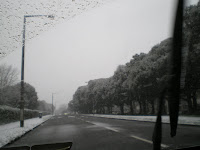 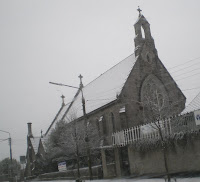 19th Century St. Assam’s church in Raheny centre. The church has been used only sporadically in the last decade. Plans were announced last year for credit union offices to occupy the building.

No more snow is forecast.