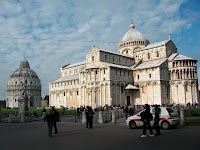 The Baptistry of St. John stands to the West of the Cathedral in the Square of Miracles. The architectural grandeur of the medieval baptistry reflects the importance of the sacrament of baptism. Construction on the Romanesque base began in the mid-12th century, with the loggia, top story and the dome completed in the Gothic style in the 14th century. 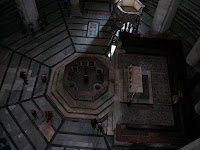 The interior of the baptistry features a tiled floor with an octagon-shaped baptismal font. The eight-sided shape represents Christ’s resurrection on Sunday, the first day of the week made new, an eighth day in which we continue to live.

The baptistry features amazing acoustics which allow an individual to create ethereal harmonies. Click below to listen: 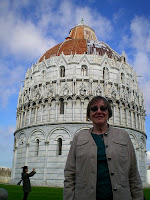 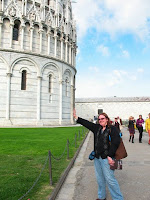 Turns out the baptistry leans 0.6 degrees toward the cathedral, so I thought I’d help out a little. 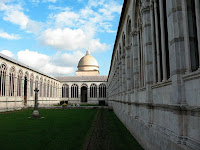 The other monument on the piazza is the Camposanto monumentale (monumental cemetery). The oblong Gothic cloister was built in the late 13th century over an existing burial ground. Note the slender mullions and plurilobed tracery of the inner court (divided windows and ribbed windows or vaulting). In addition to grave markers the Camposanto contains Roman 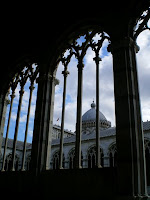 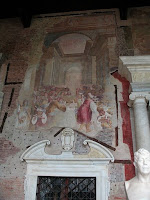 sculpture and impressive frescoes from 14-17th centuries. The frescoes have been restored after the roof of the camposanto was set afire by allied bombs in WWII. 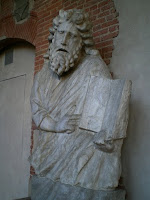 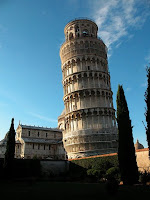 Several museums are also located near the piazza. We visited the Museo dell’Opera del Duomo which contains further examples of art work, craftsmanship and architectural features of the Piazza dei Miracoli monuments. The museum is tucked behind the campanile and provides excellent views of the tower. 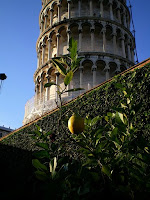 Up Next: Eating in Pisa. (Yeah, you knew that was coming.)