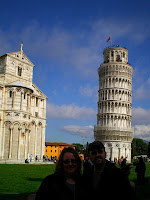 Walking toward the Piazza del Duomo, the Cathedral Bell Tower came into view as we crossed the Piazza Ardvescovada. Approaching from the South, the tower seems rather impertinently upright. But as we rounded the corner into the Piazza del Duomo, or Piazza dei Miracoli (Square of Miracles), the tower took on its familiar stance. Familiar indeed. I definitely had a “Wow, I am somewhere famous” moment. Even more so when verifying shots on the camera screen, seeing my smiling self right there in front of the Leaning Tower. I never dreamed of visiting Pisa. I’ve even held silently unflattering opinions of the tower, thinking it was a shoddy tourist trap somewhe 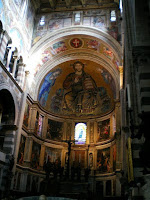 re with unfortunate peasants selling trinkets in its oddly cast shadow. While trinkets abound, my prejudice was undeserved–the tower is beautiful. A wedding cake of gleaming marble arches, the campanile definitely lists, and curves slightly, the result of attempts to correct the sinking tower during construction. The bell tower was installed in 1372, almost 200 years after the project began. It think it is the cha 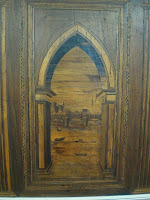 rm of this Building-That-Could that has secured the tower as an iconic image and may cause one to exclaim, “I’m at the Frickin’ Tower of Pisa!”

The tower does not tilt pensively in solitude. The Piazza dei Miracoli is also home to the Cathedral, or Duomo, the Baptistry and the Camposanto. The Romanesque 11th Century Duomo features a mosaic in the apse and
amazing wood inlay panels. I liked the the Romanesque cathedral–still ornate, but visually calmer than some Gothi 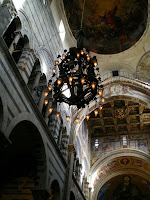 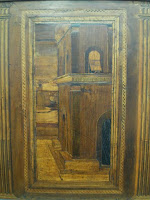 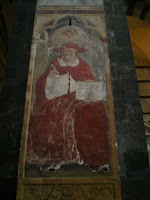 Next: Inside the Baptistry