Dinner in Azay-le-Rideau The Airport Shot 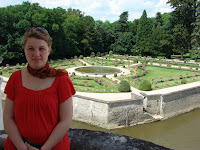 Chenonceau was number one on Andrea’s list to visit because of its impressive location, spanning the River Cher. We set out for Chenonceau around 10:30 Tuesday. The morning was lovely for a drive along the Loire. The section of the Loire we saw reminded me of the Guadalupe, wide with low banks, somehow both quick moving and sleepy. I wonder if you can float trip through the French towns and countryside. Tuesday was free with its sunshine, and the light was beautiful on the river. I could see why France gives birth to so many painters. 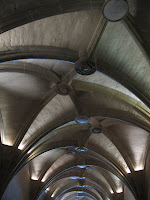 Chenonceau is a very popular chateau, definitely the most crowded one we visited. As we parked and moved in the current of people toward the entrance, we all had a similar thought: Disney World. And I suppose it was similar, when you consider that Disney World is excellent at its particular brand of entertainment and experience, and Chenonceau fully convinces you that 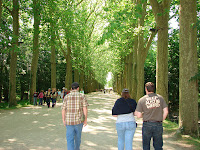 life can be luxurious and exquisite.

The château built near the village of Chenonceaux in the early 16th century charmed various women loved by several generations of Henri. In 1547, Henri II gave the château to his mistress, Diane de Poitiers, who oversaw construction of a bridge connecting the château to the opposite bank and planted gardens along the river. After King Henry II’s death in 1559, his widow Catherine de Medici (her portrait is pictured) forced Diane to exchange it for the Château Chaumont. As Regent of France, Catherine 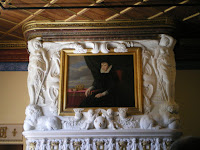 hosted lavish parties in the new Grand Gallery built over the bridge and in the newly expanded gardens. Upon Catherine’s death, Chenonceau went to Louise de Lorraine-Vaudémont, wife of King Henri III. After Henri died, Louise turned Chanonceau into a house of mourning. (Her bedroom is painted black.) A favorite mistress of Henri IV took possession in 1624, but Chenonceau remained in Louise’s family for the next 100 years.

In the mid-1700s, the Dupin family bought the estate. Madame 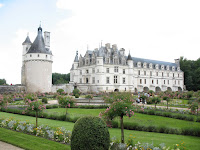 Dupin entertained many leaders of the Enlightenment, and is credited with saving the château from destruction during the French revolution by highlighting the chateau’s role as a bridge. The château had minor roles in the two world wars: during WWI the gallery was used as a hospital ward; in WW2 the gallery allowed escape from the Nazi 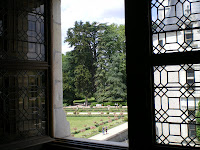 occupied zone to the free zone on the opposite bank of the River Cher.

The rooms of the château are large with ornate fireplaces, walls covered in 17th century Belgian and Flemish tapestries and carved or painted patterned ceilings . The turrets create many wonderful nooks with views onto the Cher. My favorite part of the château was the kitchen rooms located in the basement on the river level. 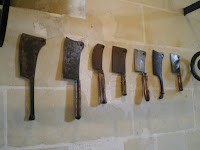 The kitchen had its own platform to receive goods directly from boats on the river and featured a stone bread oven, a butchery room and walls covered with brass cookware. The Grand Gallery is truly huge, lined on both sides with windows looking out onto the water. I also liked that each room in Chenonceau had huge bouquets of 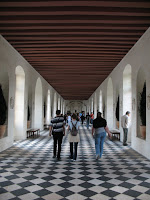 While Chenonceau’s gardens don’t compete with Villandry, they are lovely and provide wonderful atmosphere for the home and grounds. The two rivals for Chenonceau (and Henri II) are each remembered with a garden, Diane de Poitier and Catherine de Medici. I really liked the method of planting beds, interspersing the variety of plants, rather than grouping them into bands or rows. I don’t know if that’s a mark of French gardening, but I saw similar 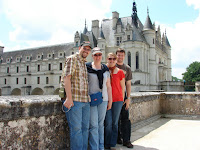 beds in a park in Tours. The gardens’ 130,000 bedding plants are rotated in Spring and Summer. Beyond the gardens are peaceful, sun-dappled woods. Chenonceau also has vegetable gardens and a maze that we did not even see.

Chenonceau was my favorite château. The gardens and grand home along with a gorgeous, sunny day will stay forever in my memory. We stayed at Chenonceau for several hours, eating lunch

on the patio (after a long wait in a short line at the cafeteria). We left around 3:00, headed for the next château.