The one where Bill becomes addicted Taking It to the Streets

I have so much to tell y’all, I’m not sure where to start. So, I’ll start with right now.

Bill is in the kitchen making Chicken with Many Peppers.  Chicken with Many Peppers entered our lives at least ten years ago. Bill has made it dozens of times. I think I even made it once. It’s a bit of a staple, although we haven’t had it in a while. It’s back tonight. In Ireland we have to forgo the poblano peppers, but we usually have a stash of chipotle chile in adobo.* Tonight Bill made whole wheat and spelt tortillas to accompany the dish.

Whole wheat and spelt tortillas. The butter goes in the chicken dish, but buttered tortillas are not a bad idea.

Bill made tonight’s dinner in the new-to-us kitchen in our new-to-us house. We moved two weeks ago, after only eight months in our last house. We had been thrilled with the last house, primarily because of the kitchen. The kitchen had a beautiful oven and a gas hob and an American-size refrigerator with an ice maker. I thought I had adjusted to European ice habits **, but one clink of those frozen cubes brought me all the way back to full ice obsession. The kitchen was its own room with a door, and the kitchen had a window.

This is the old kitchen. It was a proper kitchen.

But the landlords decided to move back into their house with the lovely kitchen (and really nice bathroom!), so we were again on the move. Bill looked deep into his cook’s heart and found the three things he needed: a gas hob, a refrigerator larger than a dorm fridge, and a window. I was worried we wouldn’t find a place with that hob/fridge/window combo. Bill was looking at places online and was repeatedly bewildered and slightly horrified by the pictures of kitchens he found there. A week after we found out we needed to move, I was sitting in the lovely, proper kitchen with our Alabama friends Kenyon and Ami. I was telling them that I did not think we would find an acceptable kitchen. I said I felt a little weird praying for a kitchen with a window, but I was anyway. I really hated to see Bill give up his kitchen with a window.

Around 6:30 we had cracked open a bottle of wine when Bill burst through the front door. “You need to come see this house I just viewed,” he said. “Can we bring our wine?” we said. So we hopped in the car and drove five minutes, put our wine glasses in the cup holders and walked into a house with a gas hob, a reasonably-sized refrigerator and a kitchen window. And a kitchen skylight. “I could be happy in this kitchen,” Bill said. We liked the rest of the house, Ami and Kenyon gave it their approval, so we told the guy we’d take it. We drove back home and finished our wine. “What were you saying to me just three hours ago about kitchen windows?” Ami said.

Bill has been busy sorting the new kitchen. It’s not as nice as the last kitchen, but he’s finding things he likes about it, like a great bit of counter for chopping in front of the window. And there’s a nice leaning spot by the hob. 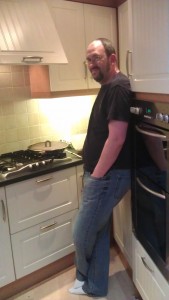 Bill finding his way in the new kitchen

The best part of the new place is the location. Still close to our Philipsburgh favorites Bombay Pantry and Lilac Wines, and much nearer to some pubs, Kennedy’s, a butcher and a green grocer. We can see the butcher from our house. Buses are much more convenient. I’m five minutes from the stop, and the bus drops me right in front of my office. The one downside to the new house is we’re down to one bathroom, but I think we’re going to be just fine.*** 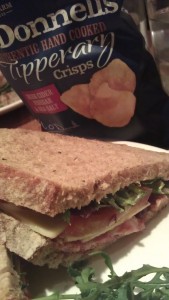 * Mexican cooking ingredients are going to be so much easier to acquire now that My Mexican Shop is on the case.

*** We are contemplating a second refrigerator.