This year we were home for Thanksgiving. Home in this instance was Bill’s childhood home in Huntsville, Alabama.

We typically have two must-eats when we’re in Huntsville: Pork BBQ from Gibson’s #2 and fried catfish and hush puppies at Greenbrier. We knew we didn’t have time for a trip to Greenbrier this visit, but Bill’s mom, Peggy, said she’d have Gibson’s BBQ waiting for us when we arrived Wednesday evening. When Bill’s brother Joel heard about the Gibson’s plan, he had a better idea. I’ll smoke a pork butt for them, he said. Only one problem. Joel lives three hours away in Montgomery and wouldn’t be driving to Huntsville until Thursday. So, Joel overnighted the pork on dry-ice to Peggy’s and indeed it was waiting for us when we arrived. And it was truly remarkable. Pork BBQ in Northern Alabama is typically eaten with a vinegar and cayenne pepper sauce alongside a vinegar slaw. Joel had included sauce in his package, and Bill’s other brother Danny had brought over a bowl of slaw, so Bill and I feasted! Sorry Gibson’s, but I’m dining at Gunter’s from now all. All those Gunter boys can cook!

Not only did Joel smoke the best pork BBQ I have eaten, he smoked our Thanksgiving turkey. He brined the turkey with apple juice, orange juice, nutmeg, ground cloves, peppercorns, brown sugar, and kosher salt and smoked it over fruit wood for a few hours, finishing it in the oven. The turkey was perfect–moist, flavorful with tasty skin. He also brought up some of his lovely homebrew, a summer ale with honey and a hint of orange. It was sunny and 74°F/23.3°C, which passes for a summer day in Ireland, so summer ale was not out of place.

I haven’t traveled all the regions of the US eating Thanksgiving dinners, but I imagine two things identify our Thanksgiving meal as Southern: 1) more than one casserole and 2) cornbread dressing. First of all, we call it dressing. Academics may debate the difference between stuffing and dressing–some say stuffing is cooked inside the bird, dressing outside–but I think they are basically the same thing. Cornbread dressing is a fave from both of our childhood Thanksgivings. A few times Bill has experimented with different types of dressing and savory bread puddings, but we keep coming back to cornbread dressing.

Sweet potatoes are a Thanksgiving staple, and for years were topped with marshmallows, but somewhere along the way everyone discovered that you could top sweet potatoes with a butter, brown sugar and pecan crust, and it has been a standard for a couple decades. This particular incarnation was straight from Paula Deen in all of its buttery glory. The potatoes are baked to intensify the potato flavor. A souffle mixture with egg is topped with the sugar crust, and this stuff is good y’all!

As amazing as Joel’s turkey was, I really enjoyed several slices of ham. Smoked ham is rare in Ireland, and I just love it.

The Brussels sprouts were Bill’s contribution. In 1998 Bill made a Thanksgiving Menu from Food & Wine Magazine which included Brussels Sprouts pan roasted with shallots and pancetta. These sprouts instantly became a must-have Thanksgiving dish for us, and have made more than one Brussels Sprouts convert. As many times as Bill has made this dish (it’s not just for Thanksgiving!) these were some of his best. The shallots and sprouts were browned and nicely caramelized and silky with pancetta “flavor.”

The corn casserole was new this year. I didn’t get the recipe but it must be similar to this one that mixes corn, cream cheese and jalapenos together and bakes them. (See the full recipe.) Can’t really go wrong with that. A spicy dish is welcome amongst all the rich foods on the T-day table.

Of course we had jellied cranberry sauce. I’m a purist when it comes to that can-shaped condiment.

How does one describe Cherry Fluff? Does sweetened condensed milk, a can of crushed pineapple, chopped pecans, cool whip and a can of cherry pie filling paint a picture? It’s sweet and tart and fluffy and completely frivolous. In other words, a fab holiday food.

Along with cornbread dressing and Cherry Fluff, Bill had specifically requested field peas, so Joel cooked up a mess of them with a ham hock. I’m not a huge fan of field peas, but Bill was thrilled.

We didn’t even think about dessert until many hours after dinner, but when we did we had a caramel pumpkin pie and apple cake to choose from, or of course eat both. They were both delish, but I wound up eating more of the apple cake. Makes a great breakfast. 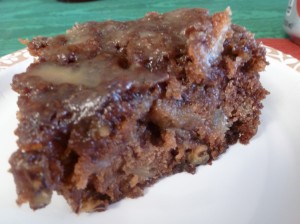 This is the recipe (more or less) as passed to Peggy by her friend Myrtle.

And for your viewing pleasure, 50 seconds of Bill and me discussing Thanksgiving at this link http://www.rte.ie/tv/iwitness/. Look under the archives for the 24 November episode.

7 Responses to Home for Thanksgiving