What We’ve Been Eating

The other day one of Bill’s coworkers asked him if he avoids dinner when he’s had a large lunch. Good Sir, Bill replied, placing his right hand on his chest (as I imagine it), I never avoid dinner. The Irish are really good about having only one large meal a day, frequently having “tea” in the evening, which I think is a sandwich or something else light. That’s a pretty good approach, but we were amused at the notion of avoiding a meal. Run away!

So, here are a few examples of our non-avoidance: 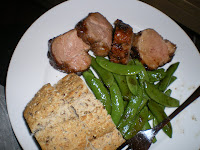 If your husband ever emails you at work to say, I’m going to make the maple glazed pork loin from Cooks Illustrated, you should say, Alrighty! I believe I declared this pork with sauteed snow peas to be the best meal I had ever eaten. 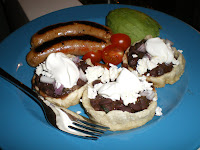 My recommendation for any expat with a desire for Mexican food is to bring your own chef! Bill made these tasty sopes, which are basically thick corn tortillas pinched into small boats, and filled them with black beans, apetina (cows milk farmer’s cheese), red onion and greek yogurt. Served with a few sausages and avocado. 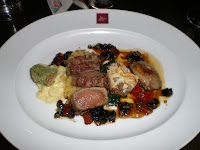 Restaurants can also provide delicious meals, and Bill doesn’t have to slave in the kitchen. We hadn’t been out to dinner in City Centre for a while, so a few weeks ago, Bill came into town and met me for dinner at La Mère Zou on a Monday night (March 30). Our meal was lovely. I had a spring pork terrine for starter; Bill had roasted quail on truffled white beans. My seabream with white asparagus, girolles & jerusalem artichoke fricassee was very nice, but Bill’s lamb tasting (pictured) was the star of the meal–roasted loin, herb crusted fillet, braised spiced shoulder and glazed sweetbread. The braised shoulder was terrific. I finished up with a smooth and light almond panacotta, and Bill had pain perdu, which is indeed French Toast! 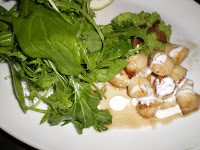 We recently dined with friends at The Winding Stair, a restaurant that has been on our list for a while. The buzz in the dining room was great, with large windows overlooking the Liffey. We were impressed that the menu contains many Irish ingredients without falling back into stodginess, or forward into inaccessible nouveau. I had a seafood meal, scallops (pictured) followed by mussels and chips. The perfect chips were served with a wicked aioli that was widely appreciated by the table. Bill’s starter proved our theory that black pudding works much better as an ingredient rather than a patty on a fry up. Served with chorizo and potato aside dressed greens and chewy brown bread, this dish was a knock out. Bill’s main of pork, kale and blue cheese was also delish. Dishes our friends enjoyed included a lovely butternut tart and some pearl barley risotto, which was admittedly not super attractive, but tasty. We just had coffee and tea to end the meal, as our portions had been generous.