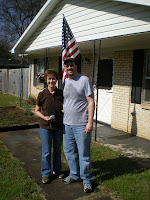 People have accused me (encouraged?) of a food bias. So, let’s get straight to the point. We have two Must Eats whenever we visit Bill’s mom in Huntsville, AL:

Peggy had Gibson’s waiting for us when we arrived, and also whipped up a bowl of Cherry Fluff. I LOVE that stuff. As far as I know, Cool Whip does not exist in Ireland, so this pink flavor-cloud studded with cherries and pineapple tasted truly exotic. We did a bit of shopping in Huntsville, 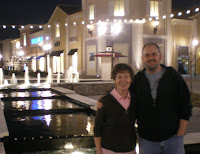 including a stop at the always wondrous Target. I bought some extremely cute felt Easter baskets which have quite impressed my friends here. They cost a dollar! So great.

We visited the fancy Bridge Street shopping center Monday night, and had dinner at Red Robin 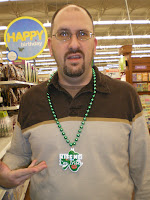 (which always makes us think of Jered–our friend, not the Subway guy).

In St. Patrick’s Day I awoke to realize I had brought nary a green item to wear. Weird since my wardrobe is 50% green. Our Paddy’s observances were low key. The day was lovely in Dublin I hear. Last year we were a bit chilly at the parade. One of my friends said March 17 brings childhood memories of being cold and wet. My informal survey revealed that many Irish families celebrate St. P’s with a family meal akin to a Sunday dinner, and some kids would get a new outfit. Lots of folks attended the parade when they were kids, but almost no Dubs I know attend now. 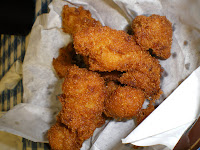 Tuesday was a glorious Alabama Spring Day. Bill and I had lunch with his friend Merri-Beth, and we shopped a bit more in the afternoon. We met Bill’s brother Danny and family for dinner at Greenbriar’s Tuesday night. True to form, I took pictures of the hush puppies but not of any relations. I’ve tried to explain hush 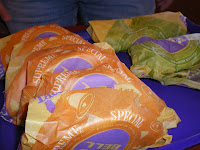 puppies to people here, but they don’t understand. How could they possibly understand?

Peggy sent us away with a bowl of fluff. She offered us the leftover BBQ, but we had something else in mind.